I don’t really have a guide of what to do and see in LA because it’s such a big city (LA and then it’s outlying suburbs), that I haven’t explored as much as I’d like to.  I will share places that I have gone to and places that I’d like to eventually go to.  But first lets drive down the beautiful Pacific Coastline from the Bay to LA. 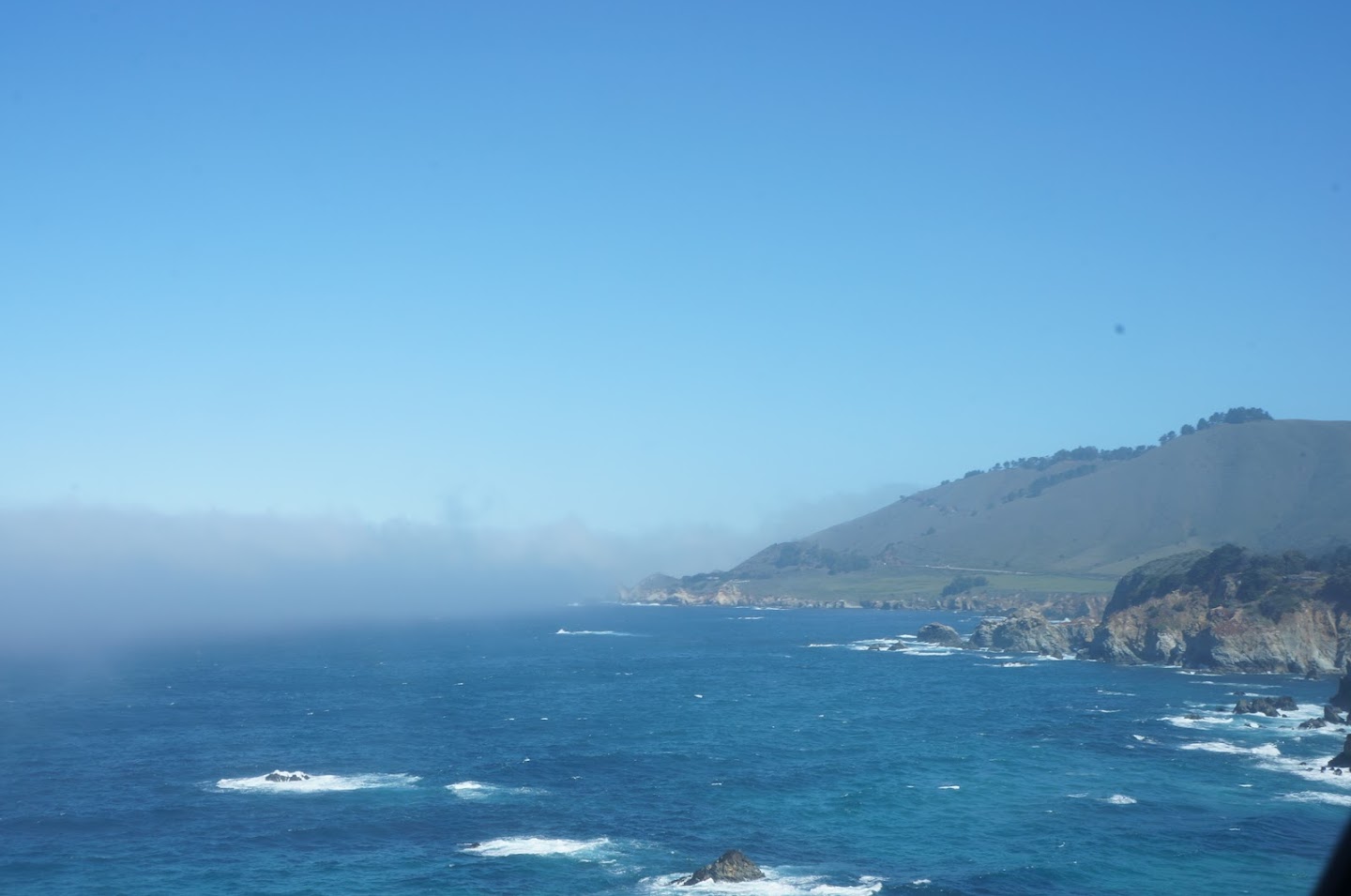 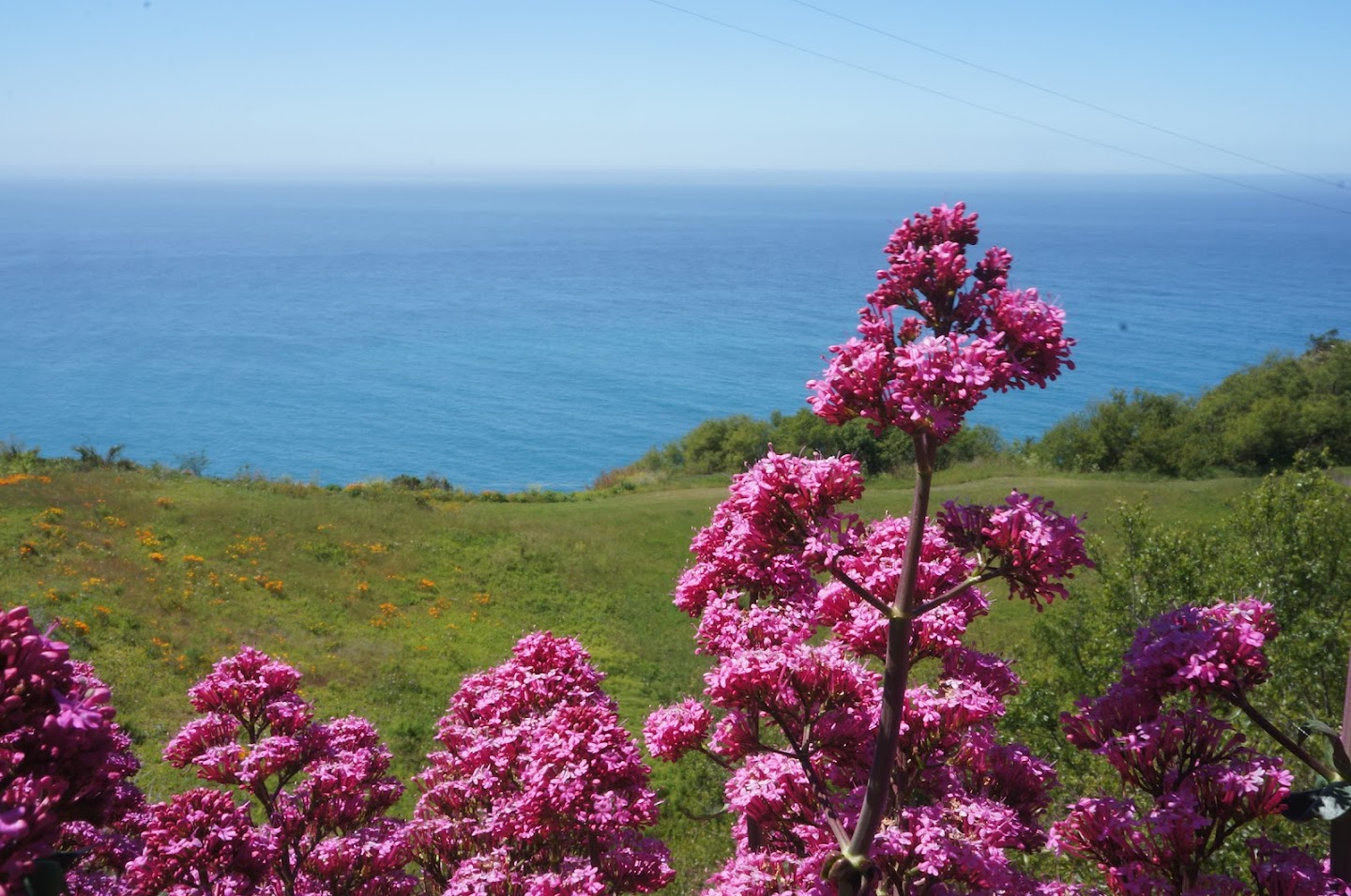 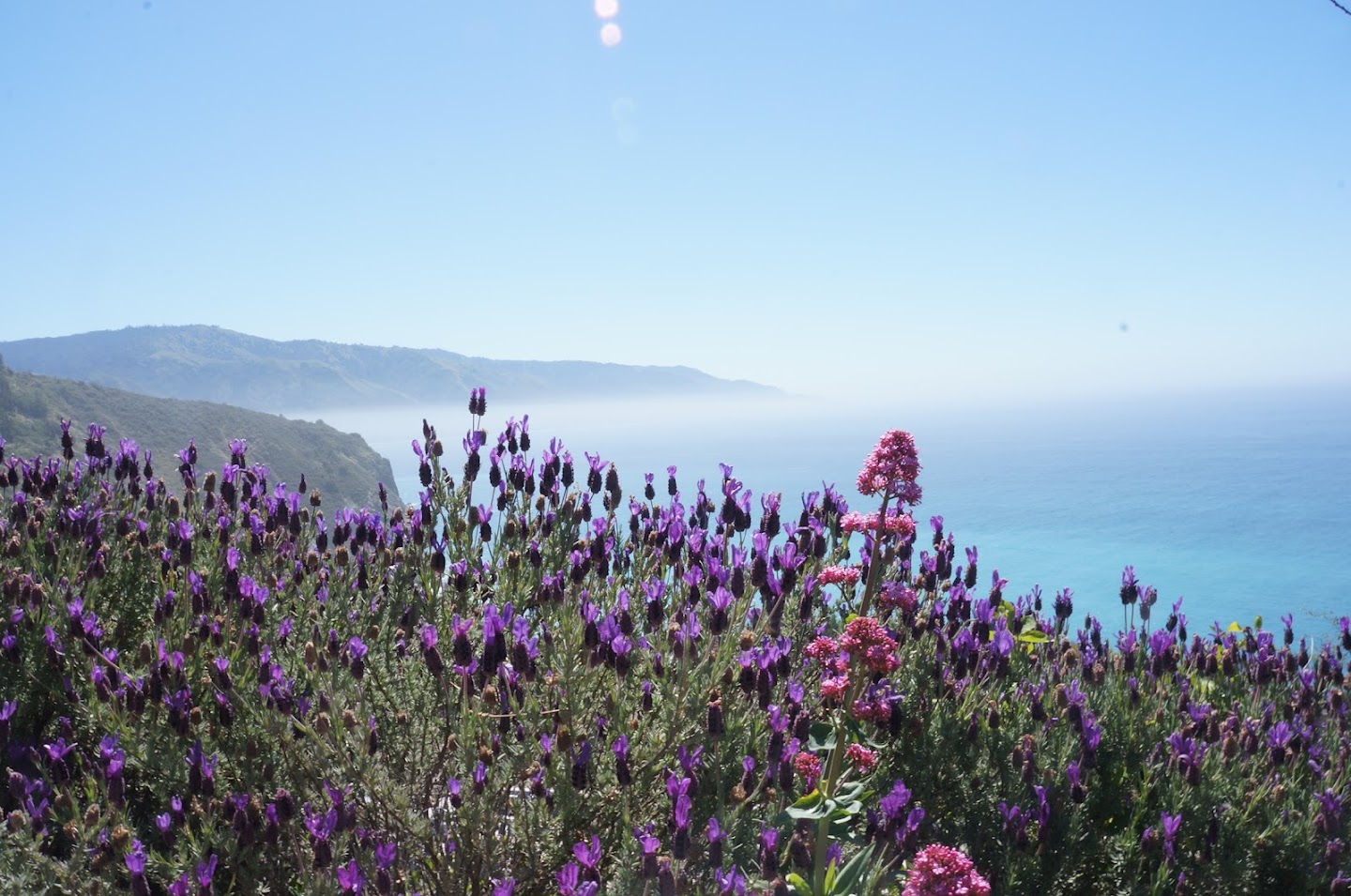 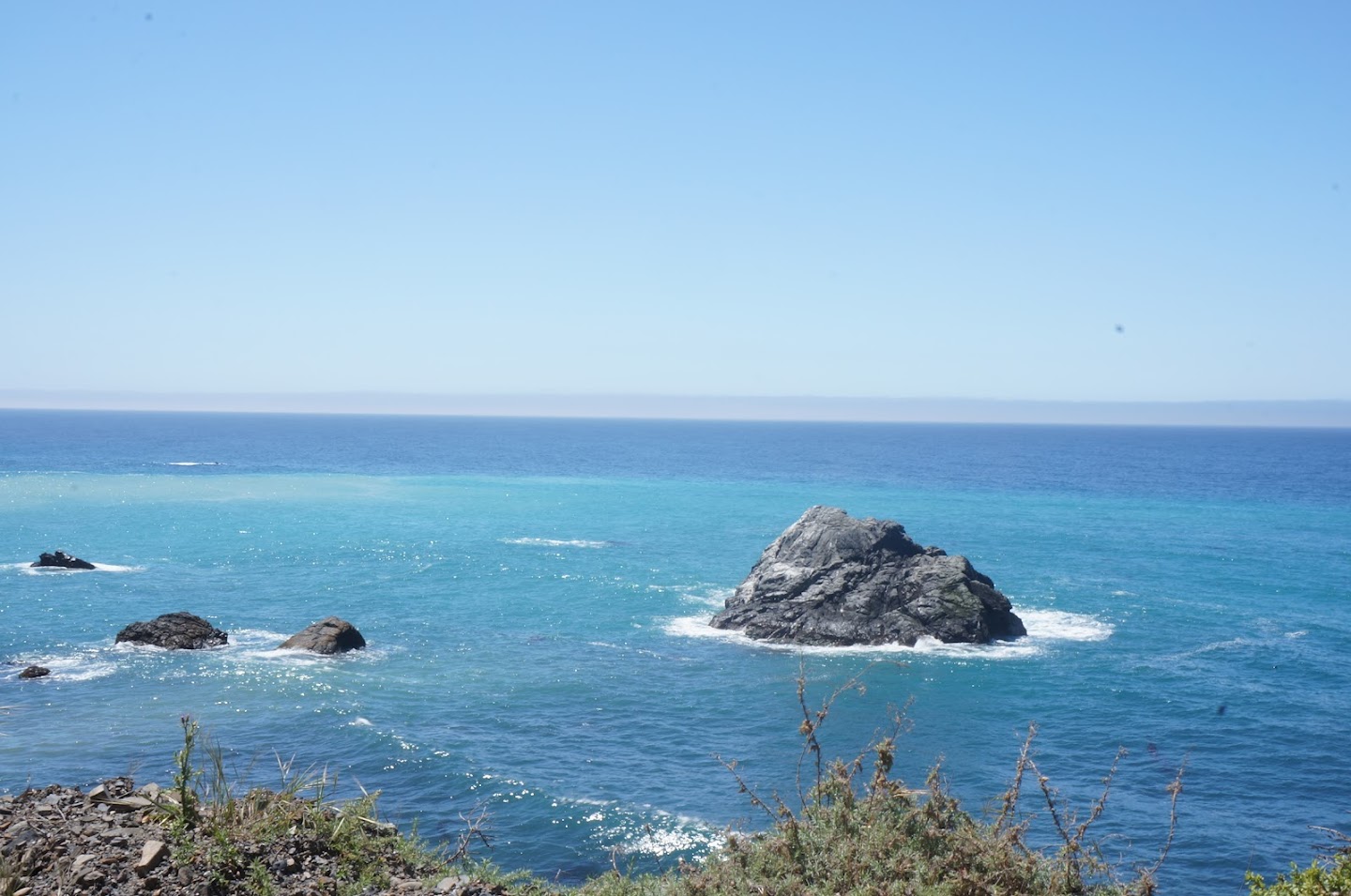 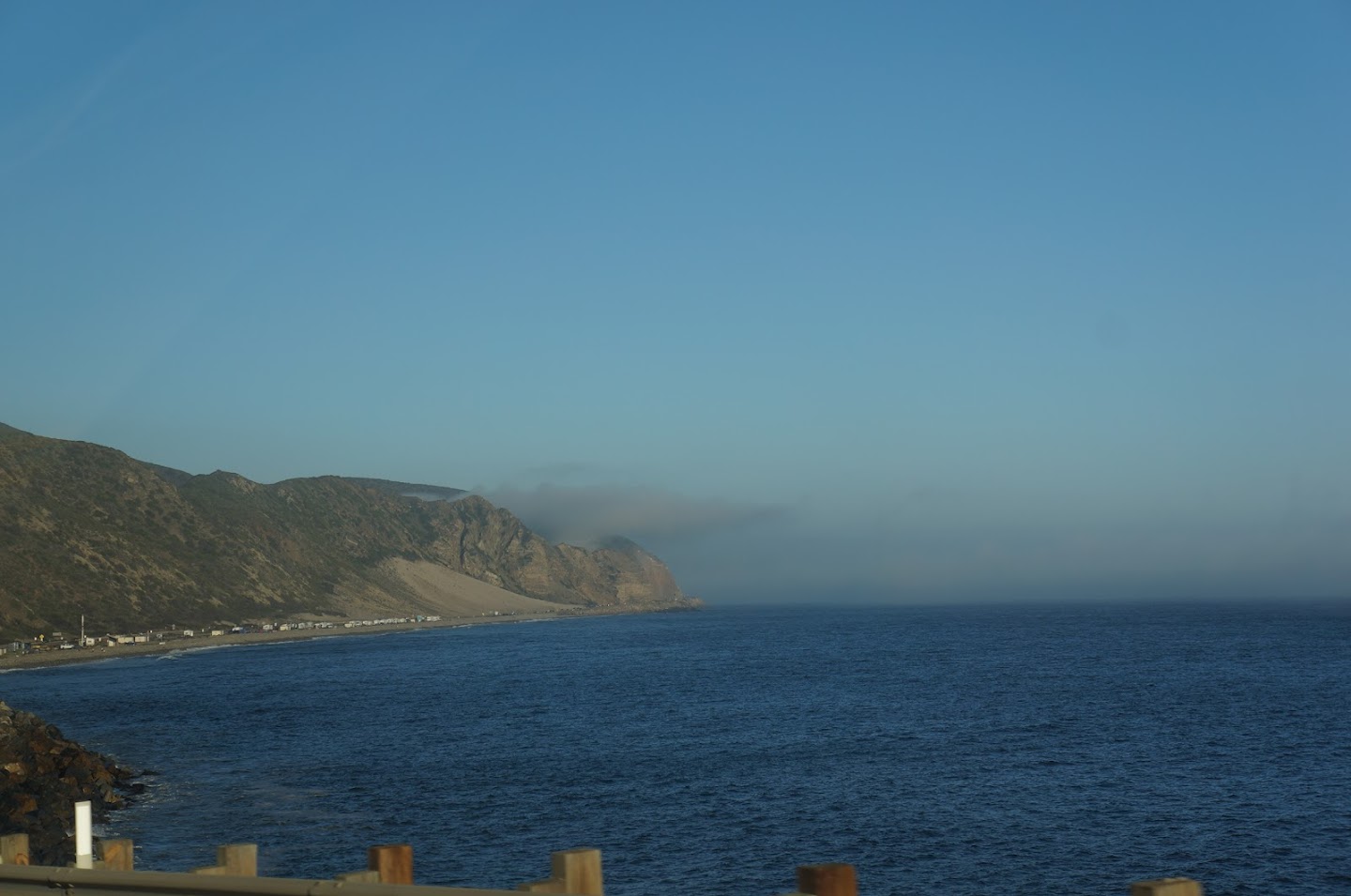 Malibu is right beyond that hill and around that fog. 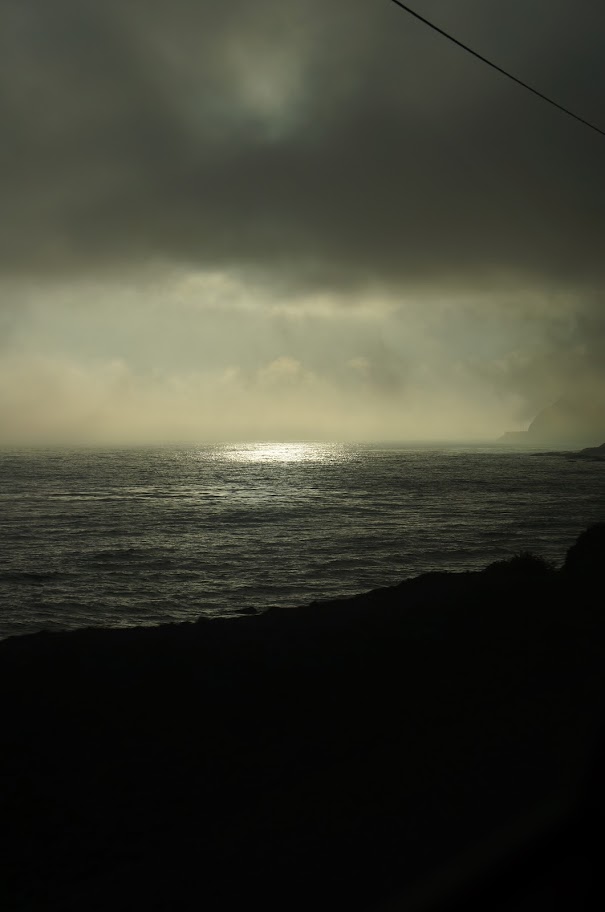 Sun set along the Pacific Ocean.

The hubs and I are suckers for a good view.  In Barcelona, we went to both Park Guell and Mount Tibidabo just to see the city and the coastline from up top.  In LA, you can go to a number of places such as Runyon Canyon, Griffith Observatory, Mulholland Drive, etc.  However, there will be days where smog and/or fog cover the city and the view will becomes hazy, like most of the days we went.  Our friends told us the best day to these places is the day after it rains as the sky is clear and you can see the beach from these locations.  Bummer we couldn’t see the city on a clear day. 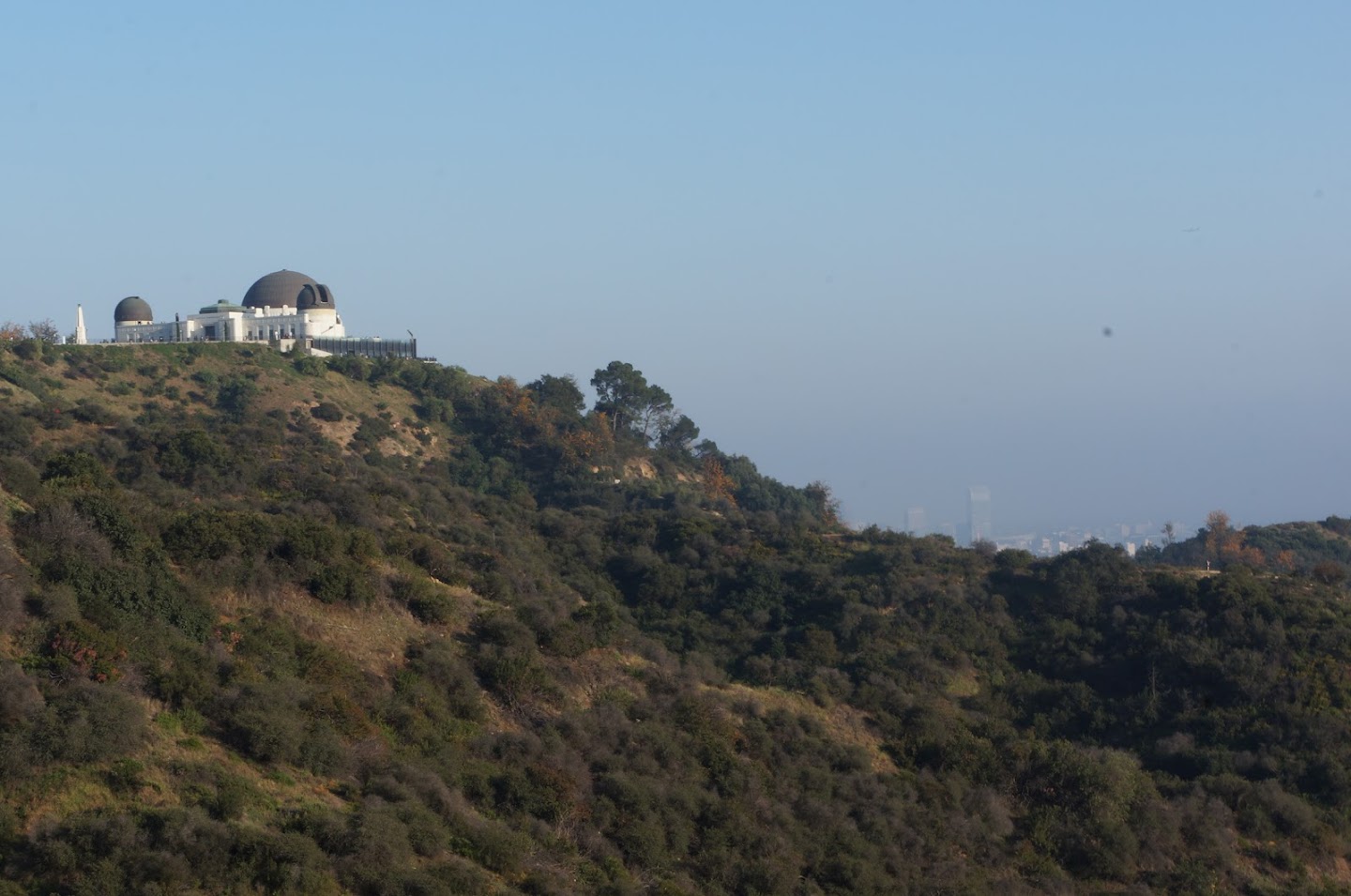 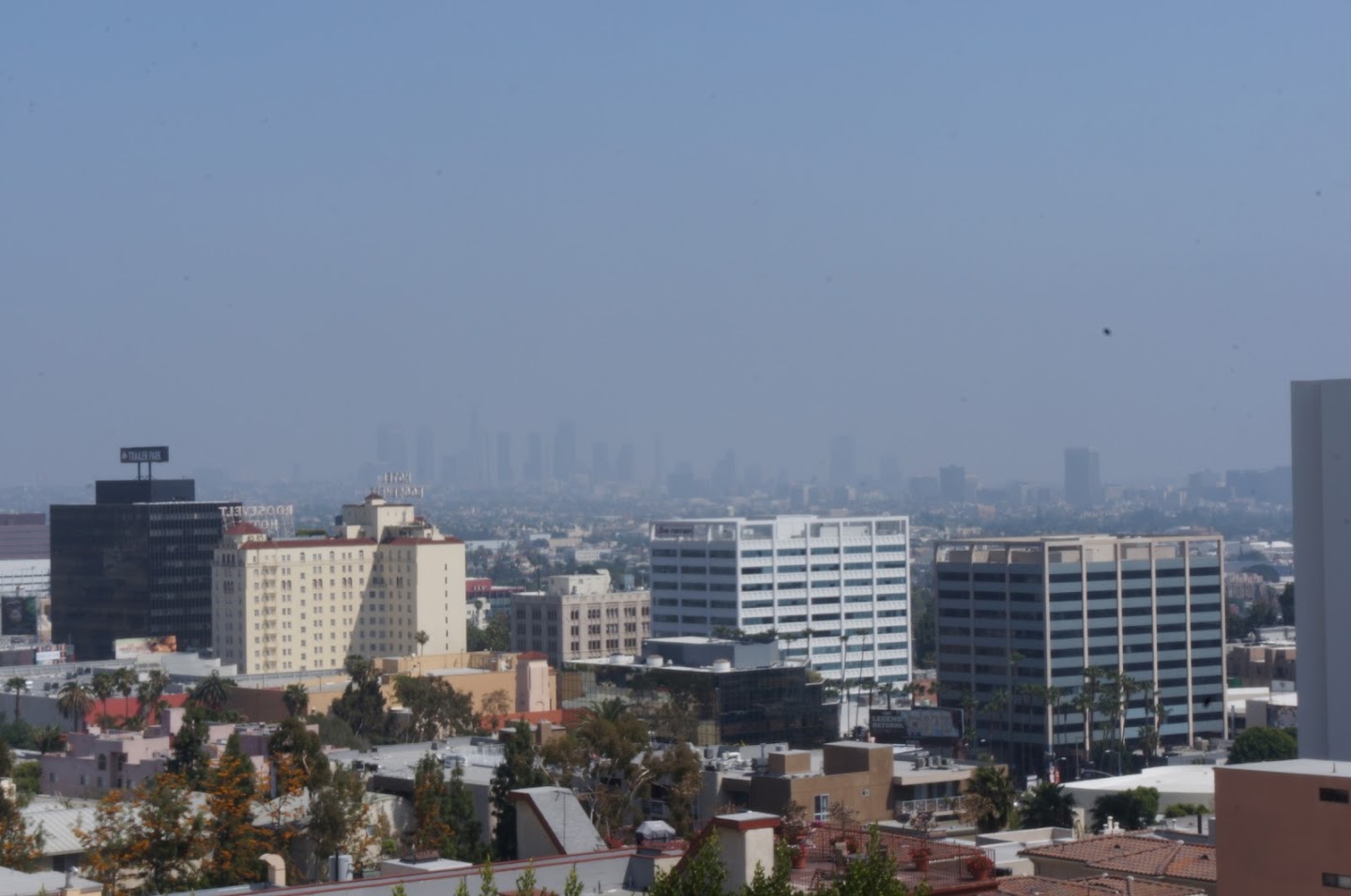 Downtown LA amongst the smoggy haze and fog 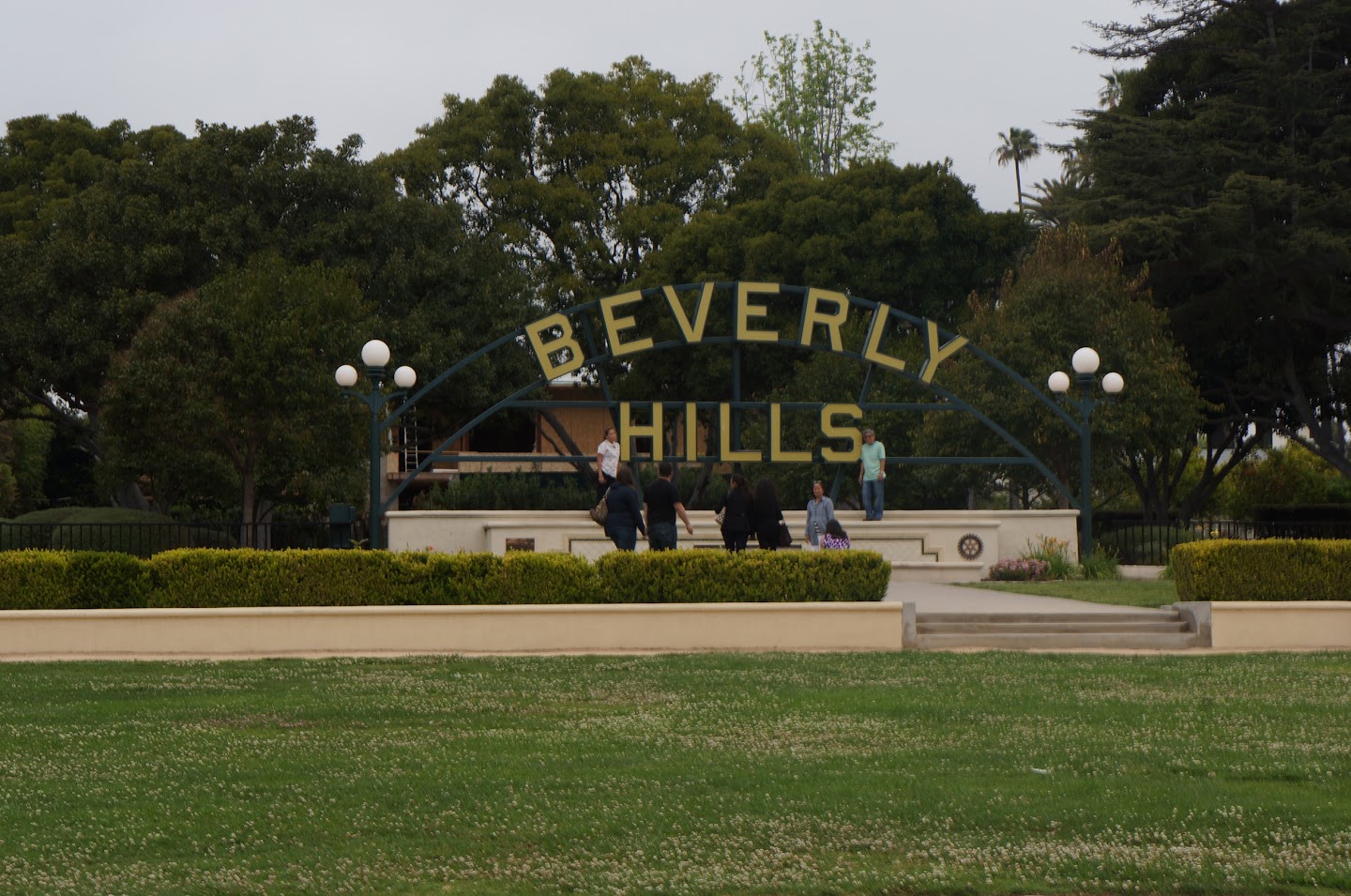 Prior to this trip we had yet to explore Santa Monica.  We were hoping to stop by here during our 2008 trip, but didn’t get a chance to.  Again, LA is so big and there are SO many things you can do that 2 days here isn’t enough to do everything you’d like.  So we stayed here this trip hoping we could enjoy the beach, but unfortunately the weather wasn’t great.  It was foggy and chilly most of the time (almost like we were in the bay and oddly enough, it was warm in the bay that weekend and chilly in LA.  just our luck).  It’s a cute touristy beach town, but still with that shopping aesthetic.  Venice Beach, Malibu, and Pacific Palisades are neighboring, so you could always drive down Ocean Ave or the PCH and visit these beaches as well.  I’m sure it gets crazy packed in the summer though.

View of the Santa Monica beach from Ocean Ave 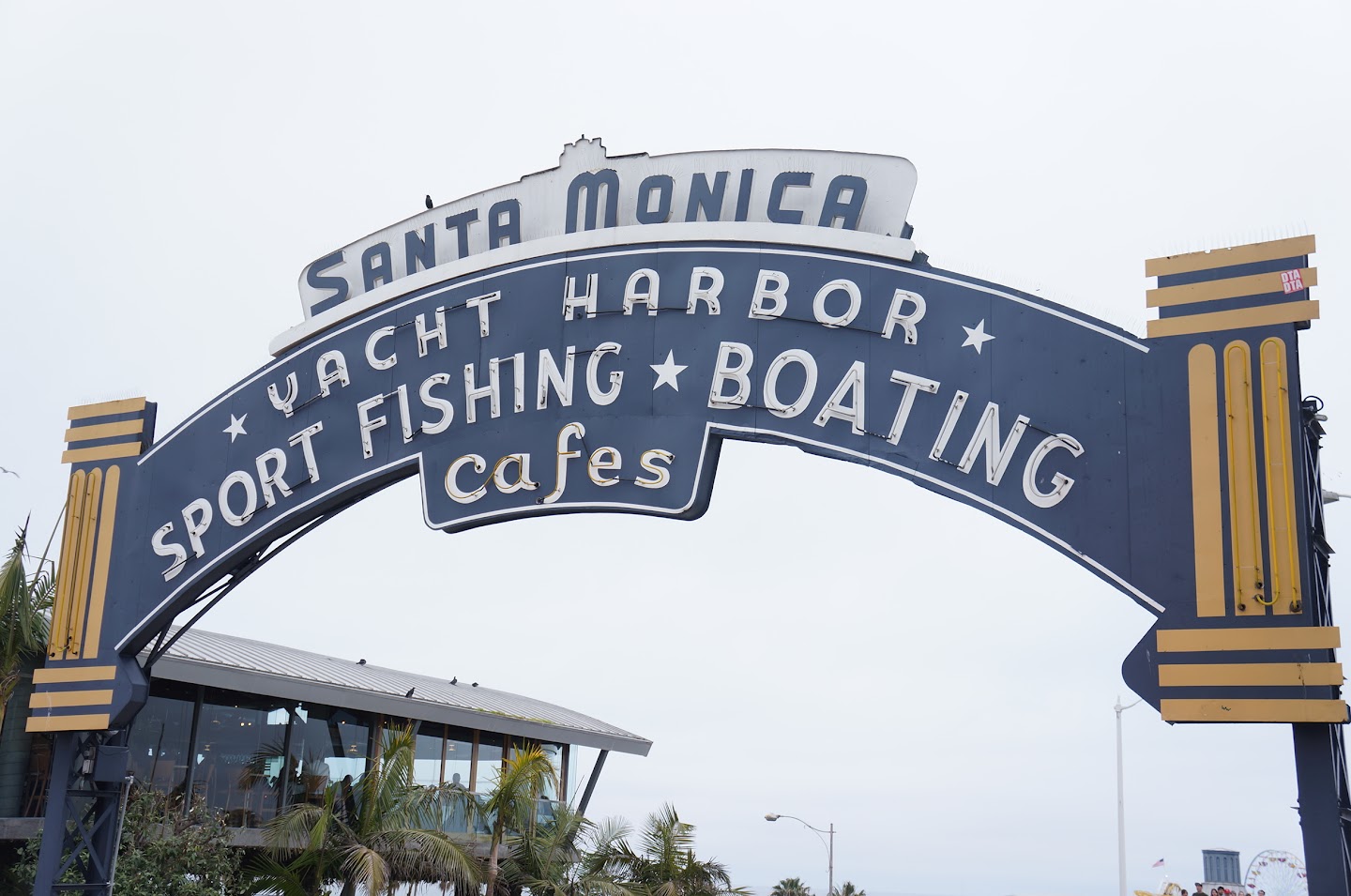 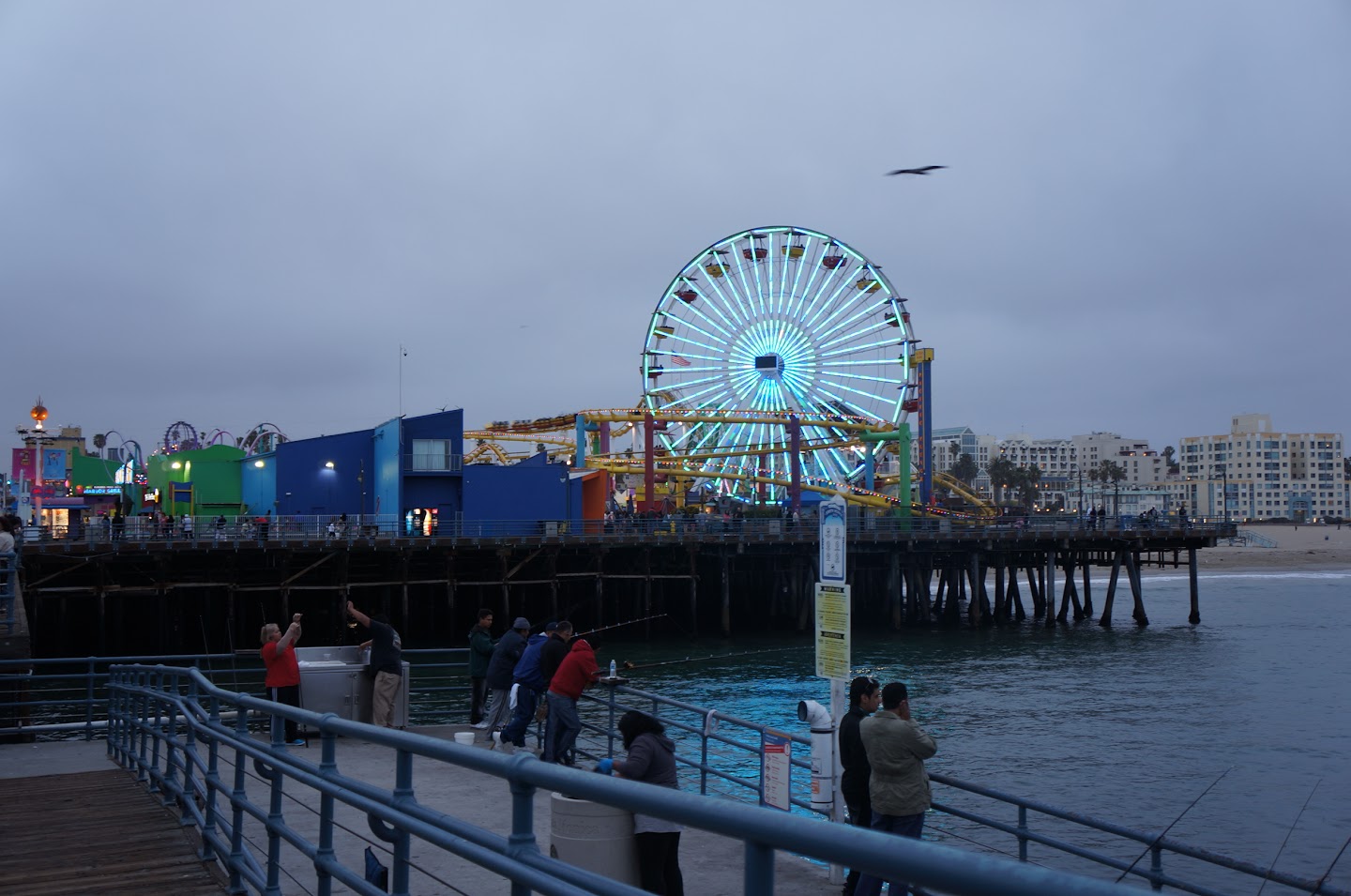 At the Boardwalk.  I feel like I should be listening to some Beach Boys whenever I’m on a boardwalk or just because I’m on the Santa Monica Pier. 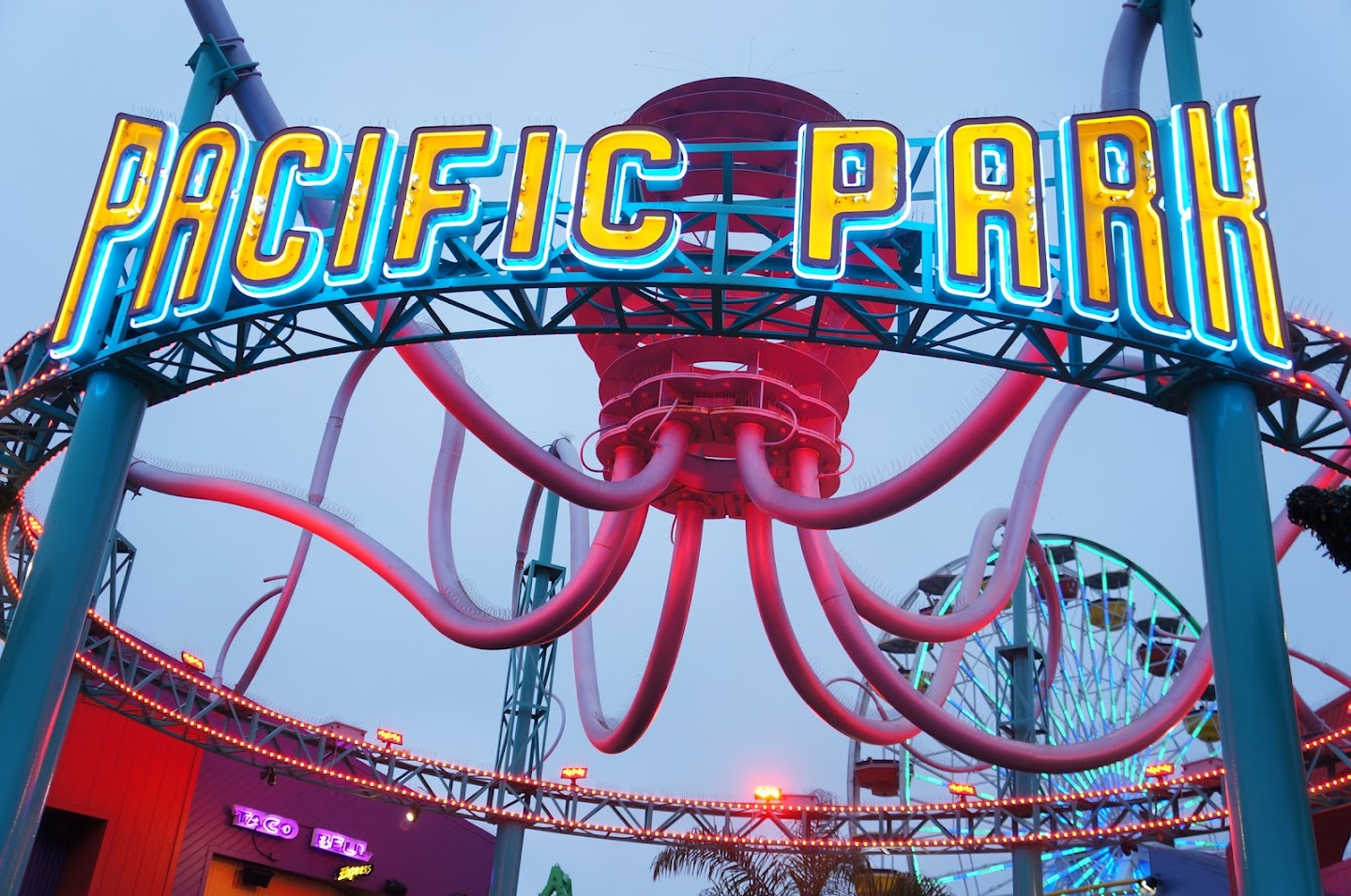 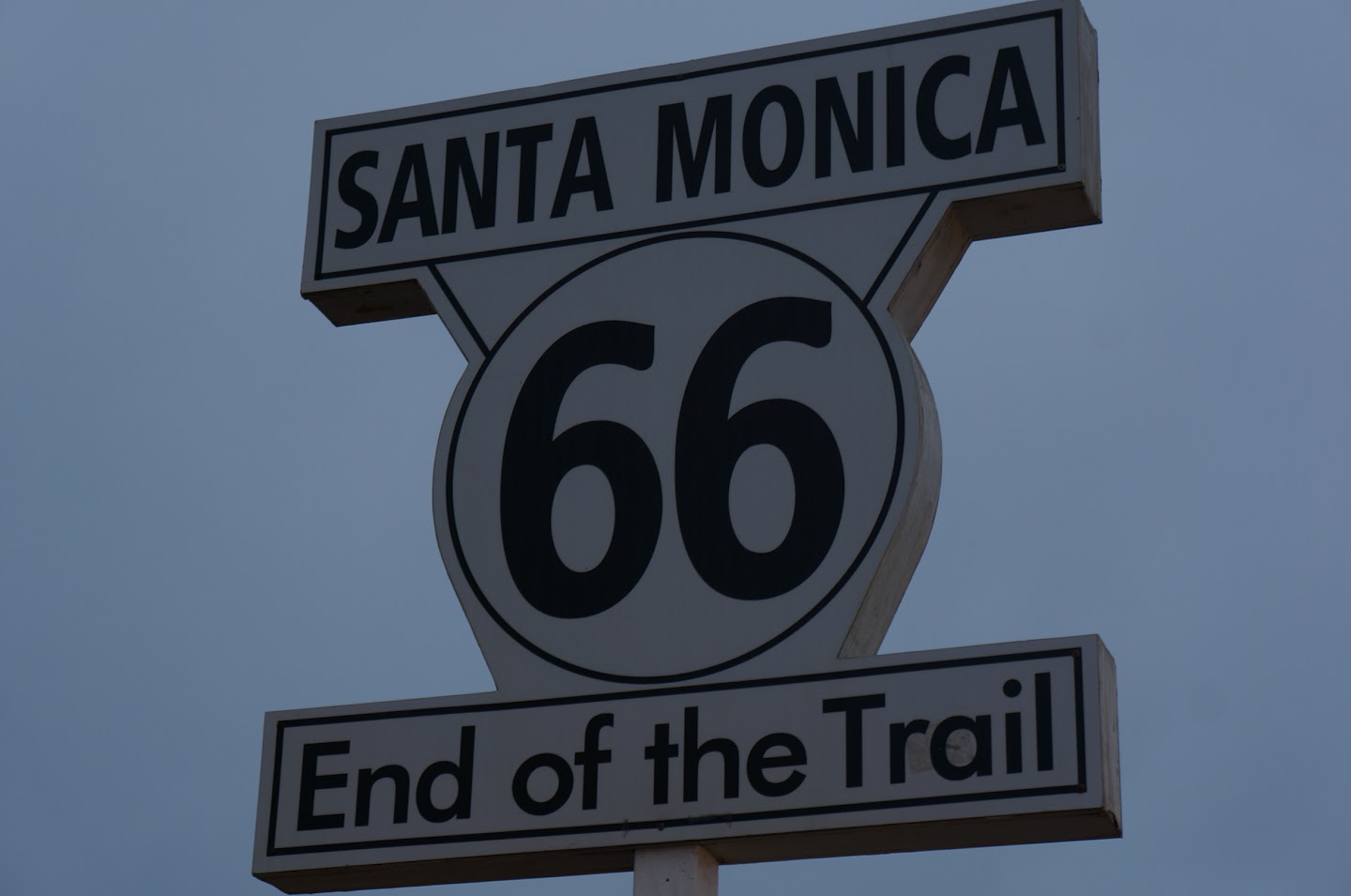 Get your kicks on Route 66. 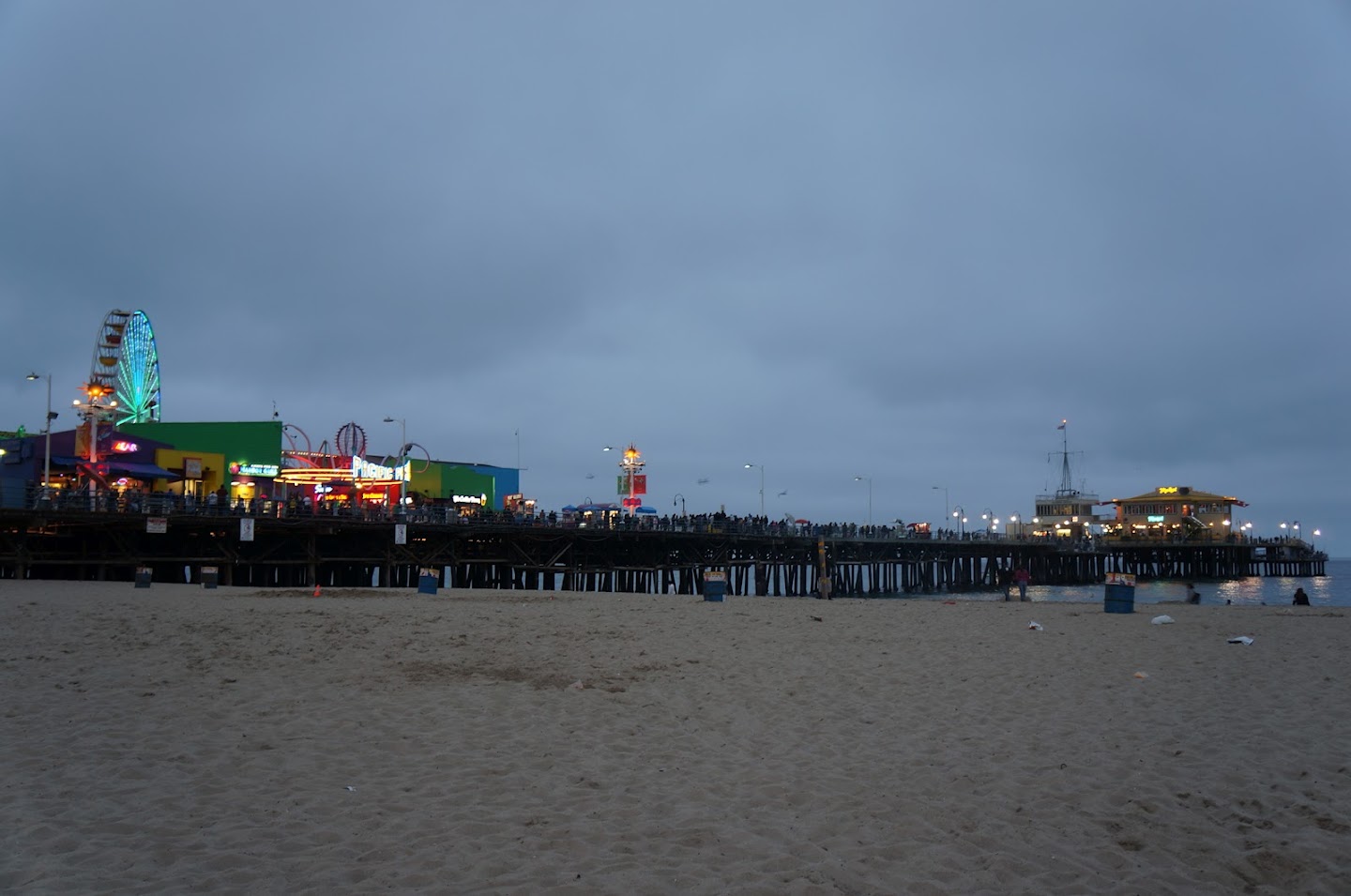 LOVE the beach, even if it was freezing! 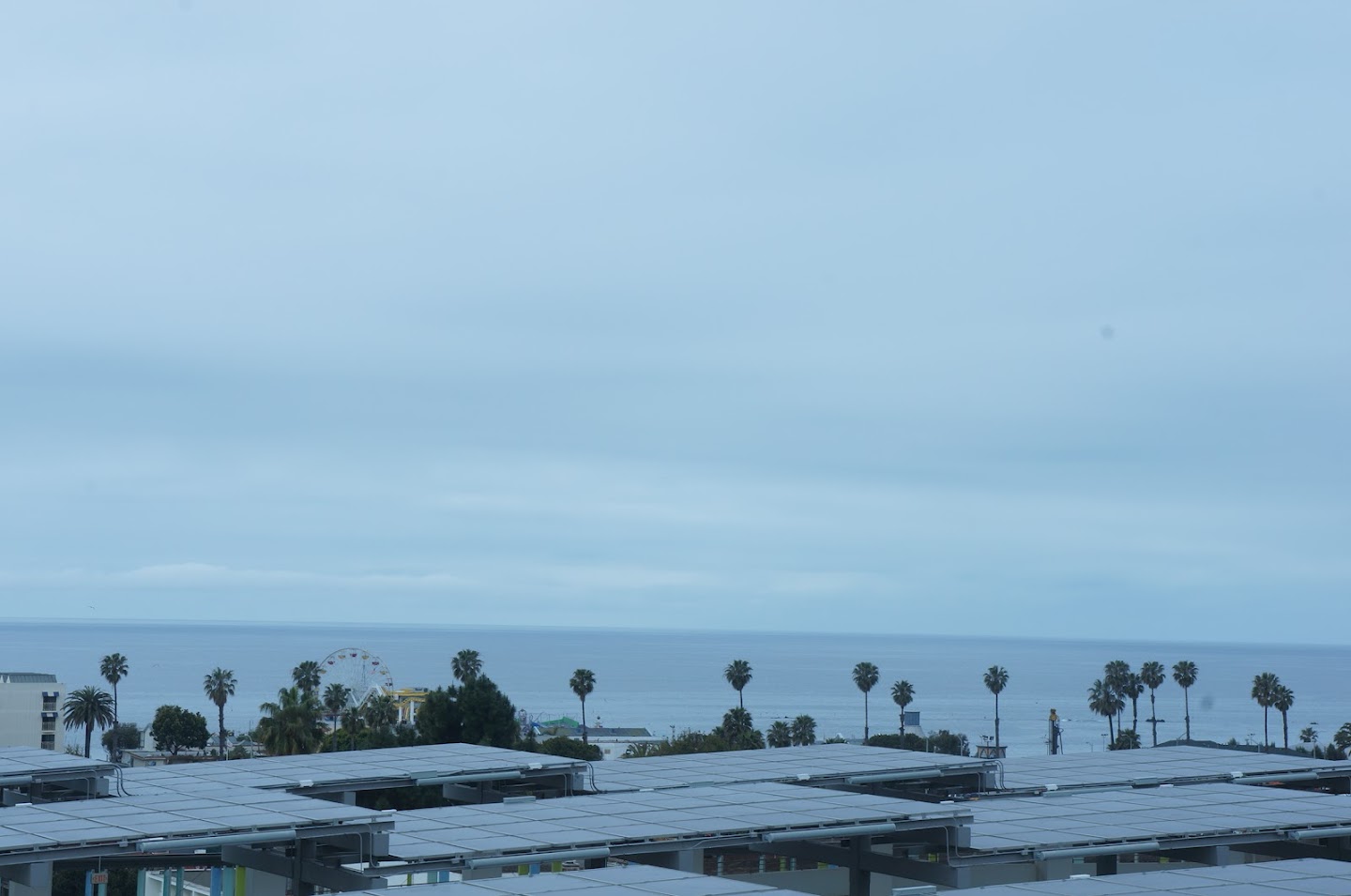 Last day in Santa Monica and we can finally see the water and the pier from our hotel balcony!

Definitely walk the Third Street Promenade while at Santa Monica for some shopping, eating, drinking (coffee, tea, smoothies, or alcoholic beverages), or even watch street performers.

We even saw Naia from The Voice singing.

Another place to visit for the fashionistas and shopaholics?  Santee Alley/Fashion District.  It’s similar to Canal Street.  Cheap jewelry, clothes, shoes, etc.  This is where I snapped up some cheap jewelry finds.

Other shopping places to go to?  Melrose Trading Post, which is open every Sunday.  Here you can find vintage clothes, antique furniture, jewelry, etc.  Other flea markets that you can go to are Rose Bowl and Pasadena City College.  I haven’t been to the last two as these happen on the first and second Sundays of the month.  Other places to shop are the famous Rodeo Drive, The Grove (where they film Extra and sometimes scenes from Modern Family), and Beverly Center.

Other things you can see or do in LA?  These are places I’ve been to or would like to go to during a future LA trip.

For food, you could always try food trucks, go to the Pink’s for some hot dogs, Roscoe’s, etc.  OR go to celebrity hot spot restaurants like STK or Mr. Chow.

I was determined to go to as many foodie spots as I could during this trip.  Unfortunately, we didn’t get to try out the famed LA trucks like LudoTruck, Vizzi, Kogi, or Buttermilk.  But we still indulged in some tasty eats!

Warning:  Be prepared to drool or eat your fist during this post.  There are quite a few mouth watering food pictures.

First stop?  UMAMI BURGER.  I’ve been wanting to try this place out since Giada mentioned it on an episode of Best Thing I Ever Ate.  They recently opened one in San Francisco, but we haven’t gotten a chance to go to the city to try it yet plus we heard the wait was ridiculous.  Luckily, there are several chains in the LA area including one by our hotel in Santa Monica.  There was a 30 minute wait but the food was SO worth it.  The hubs like it just as much as I did.  Of course, we ordered the Umami Burger because that’s what they’re known for and what Giada was raving about plus we got a Kalbi (Korean Short Rib) Burger.  We split both burgers in half so we could get a good portion to taste, which was a good idea because both burgers were equally scrumptious.  I’m salivating just thinking how juicy and flavorful these burgers are.  I’m going to go as far and say they were better than Good Eats burgers.  YES I SAID IT!

Kalbi Burger – Kimchi and Onion Strings.  This was one of the specials of the day, so I’m not 100% sure what’s on the burger.

The last time we went to LA, we completely missed Roscoe’s.  We have no idea what we were thinking!  Of course, we had to stop by this trip.  The chicken was amazing.  Crunchy and juicy!  The waffles, DEELISH, light but had a hint of cinnamon to it.  SO GOOD!!!

That’s not an alcoholic beverage.  I read reviews and one of the recommendations other the chicken and waffles was to get their juice blends.  This mixed Lemonade, OJ, and Fruit Punch concoction, called the Eclipse, did not disappoint.

After Roscoe’s we drove up to the Griffith Observatory but didn’t get to walk around like we would have liked to because parking was just a disaster.  We would’ve had to walk 15-20 minutes to get up to the Observatory and I was already a bit tired, so we headed back to the hotel and took a nap.  By the time we woke up, it was too late to get dinner and quite frankly were still full from Roscoe’s.  But we were in the mood for dessert, so we went to the Third Street Promenade and grabbed some gelato at Angelato.

The next day we met up with our friends from home that live in LA now.  We met up at Moo Dae Po II, an all you can eat Korean BBQ restaurant.  I’m so happy our friends picked this place because I’ve been trying to get the hubs to go to a restaurant like this in the Bay.  At Korean BBQ restaurants, you typically cook your own food, which the hubs is not a fan of.  The restaurant gives you the marinated meats and you cook them on a grill at your table.  They give you rice and Korean sides to accompany the meal.  I used to go to these types of restaurants a lot when we lived in Japan with my friends and family.  I know some people have their trepidations about paying for a meal they have to cook at a restaurant, but it’s about the eating and conversing experience.  This place’s bulgogi was the BOMB!

After lunch we walked around Melrose Trading Post to look for art and whatever vintage finds, but didn’t have any luck.  So we headed back to Santa Monica and went to the pier, where we stuffed our faces with some funnel cake.  You have to if you’re on the boardwalk!  If not funnel cake then some ice cream or churros, but it was too cold for that.

After the boardwalk, we went to a tapas restaurant for dinner, but didn’t end up eating that much because we were still a bit full from lunch and the funnel cake.

The next day, we stopped by Vanilla Bake Shop on our drive back home to the Bay to try out there cupcakes and macarons.  Their cupcakes are pretty good and they have a decent selection of flavors, but their macaron selection was a bit weak.  They had 6 flavors that were okay, nothing spectacular.  Definitely nothing compared to Laduree.  The flavors were basic and didn’t taste as light as they should.  I should’ve tried ‘Lette Macarons, which I read on Yelp was the place to go in LA, but it was a bit out of the way. 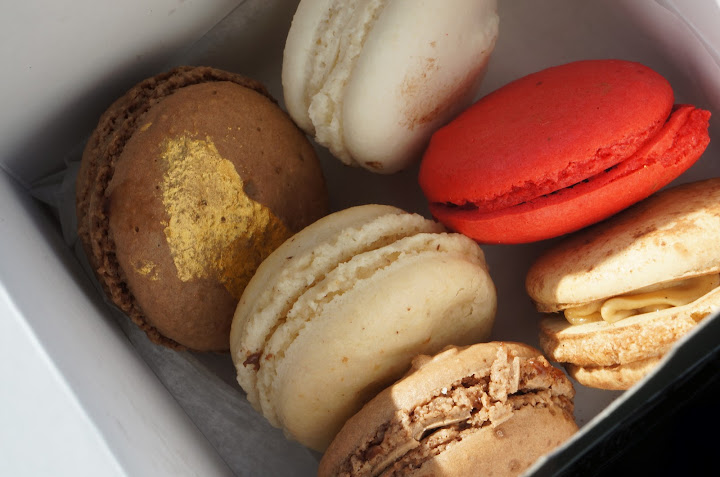 Macarons.  I got one of each flavor.  I can’t remember what the flavors are. 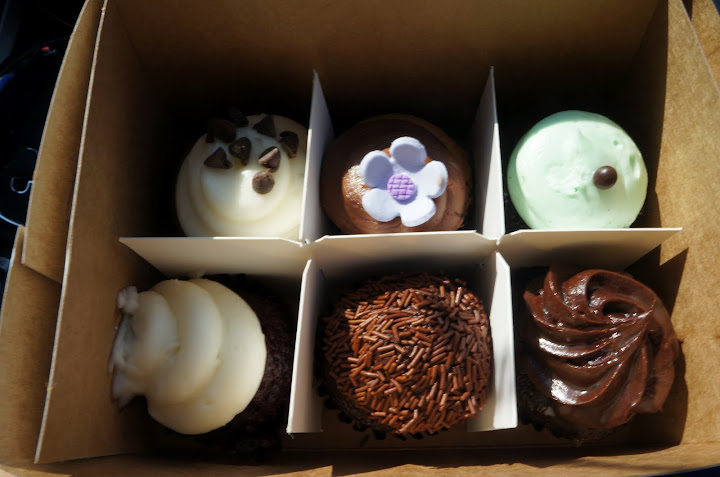 We stopped by Beverly Hills to try out a crepery, Harajuku Crepe, I read about fellow blogger and YouTube Beauty Guru, Anne’s twitter feed.  I was so estatic that they served crepes in a cone shape like they do in Japan, as opposed to flat on a plate… reminded me a little bit of my childhood.

Tasty weekend indeed.  I wish I could eat my way through LA… actually every city.

So we’re back from LA.  The drive down was beautiful.  I’ll say it again… I LOVE the California landscape.  I can’t wait to do to a Trippin – LA post.  I have some great photos to share.

For today, I’m taking a departure from Wishlist Wednesdays and FINALLY doing a Dressing Room post.  Sorry I don’t have more close ups of my outfit, but you get the gist.

I’ve been wanting to put together a color blocking post for the longest time!  Certain colors color blocking combinations I’m in love with, others not so much.  I love that for this Spring bright and bold colors are still trending, but so are pastels.  And depending on your mood you can go fierce or romantic.  I really like the bold orange and purple combination (see my pre-pregnancy colorblock outfit while on vacation last summer here), but unfortunately I haven’t found any maternity bottoms in either color.  Another trend that I really love at the moment is colored jeans and fortunately, they have cobalt blue maternity jeans at the Motherhood Maternity (along with kelly green) stores (couldn’t find my exact pair online).  In my opinion this color along with red are the “safer” and neutral options when tackling this trend.

I could have gone classic with a white t shirt or put together an outfit that was bright and vibrant.  I opted for an outfit that was bright and vibrant, which is perfect for Spring, especially on a gray (so not the weather we were expecting in LA).  I neutralized the outfit a bit with neutral colored accessories such as a black cardigan, taupe purse and bronze sandals.  If I wasn’t walking around a lot and wanted to dress up the outfit, I’d put on my nude LK Bennett pumps, carry around a nude clutch, wear a statement necklace, swap the cardigan for a blazer, and put my hair up in a bun. 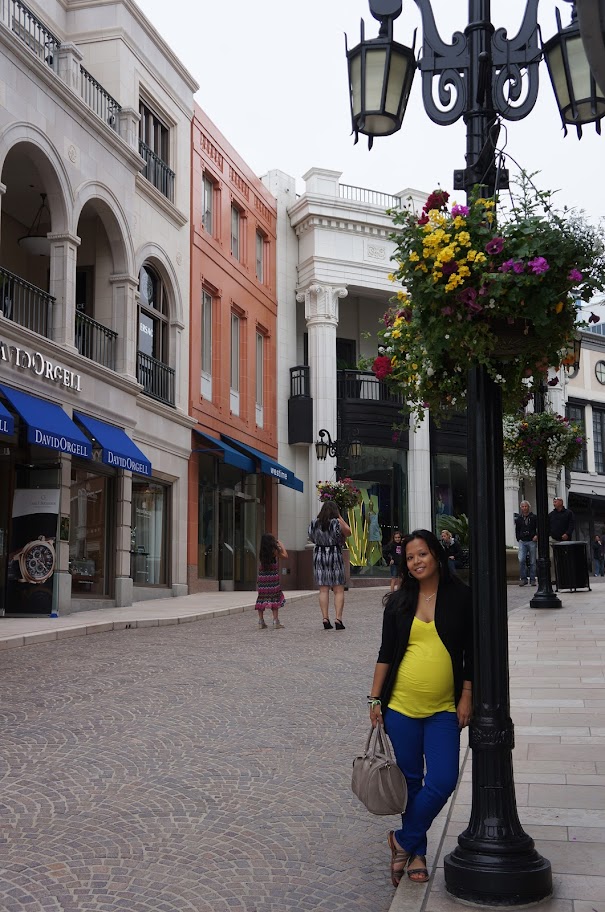 Me and my belly on Rodeo Drive 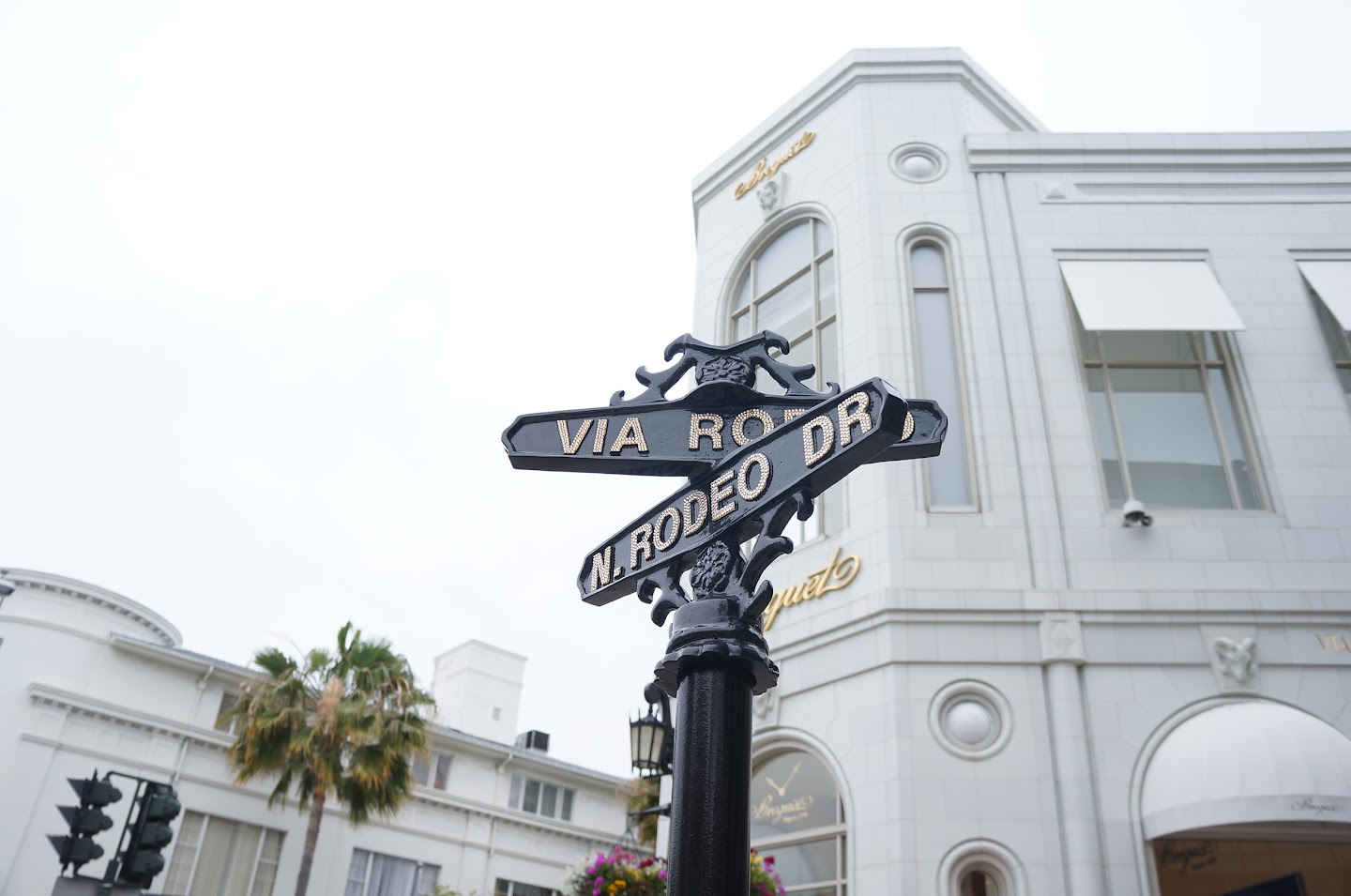 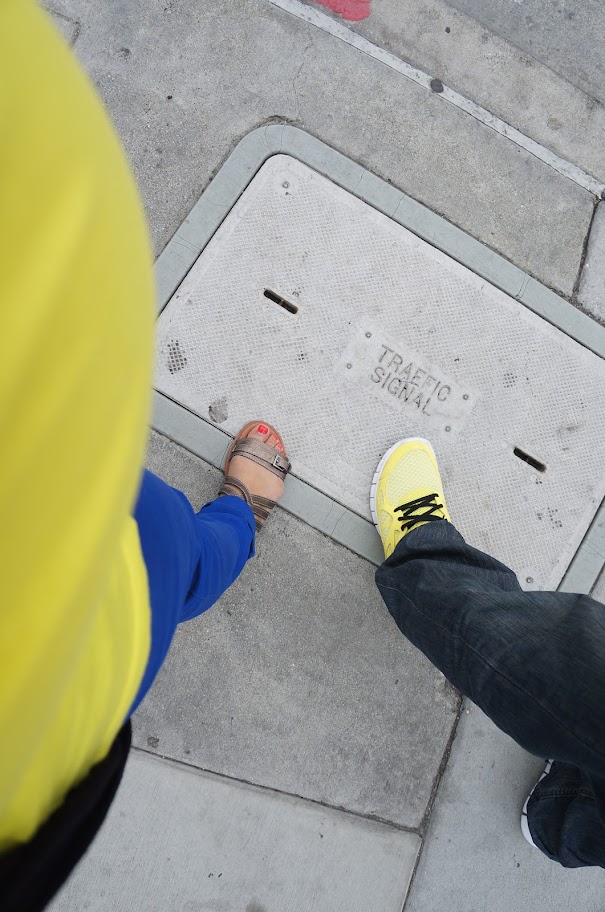 Best accessory of all?  The mister with his colorful outfit – yellow Nike frees, jeans, and a colorful bright Barcelona T-shirt (not pictured). 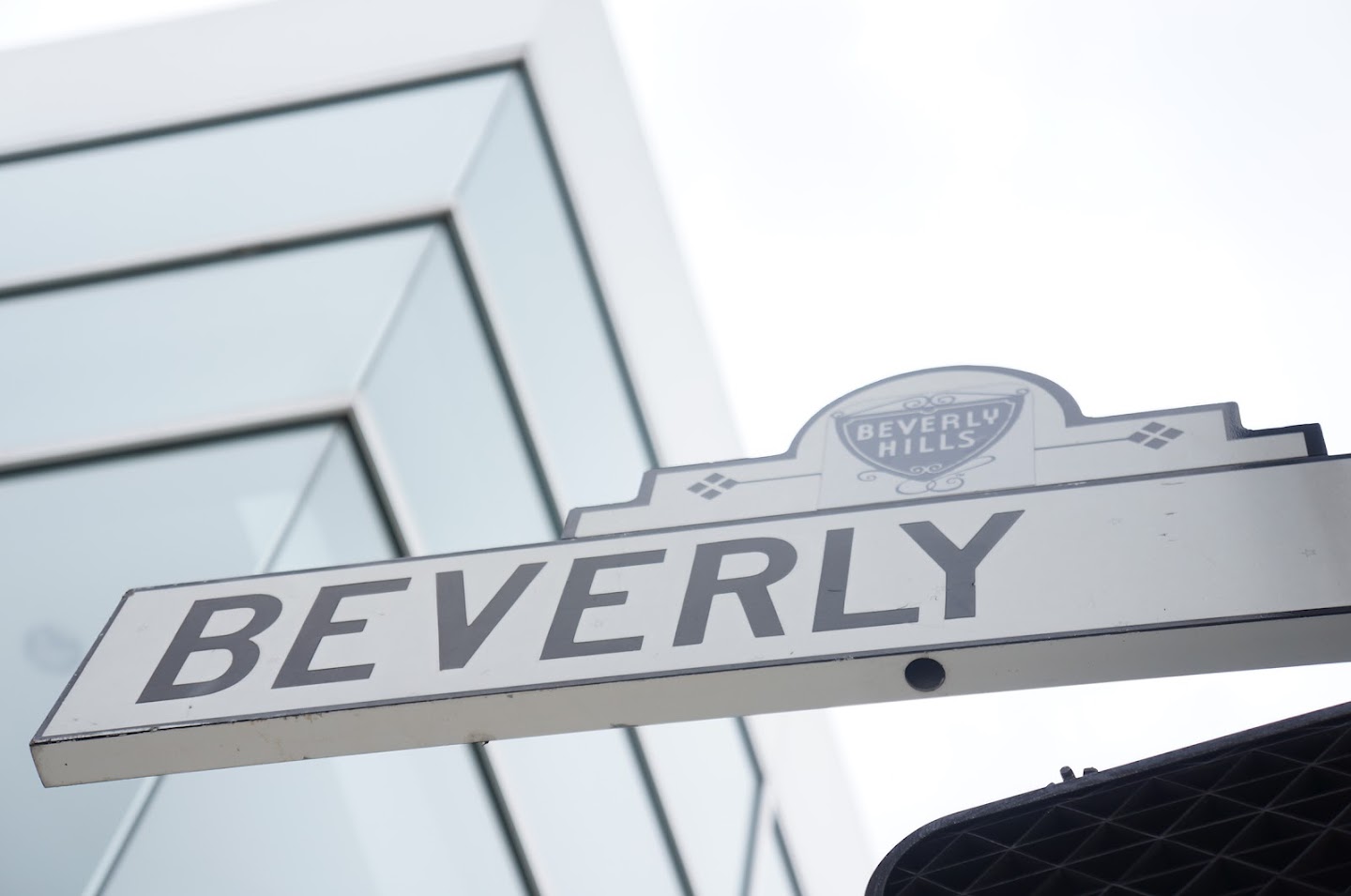 Stay tune for more color blocking dressing posts.  I’m going to try to do a remix styling post with these pants.  Plus I’ll have an upcoming post styling a vibrant yellow blazer I purchased at Zara’s!