So I apologize in advance if my posts this week aren’t as frequent.  I’m out on the road again and as usual, I’m crazy busy.  By the time I get out of work, which isn’t too late (I’ve worked much later), I’m wiped out (one of the many perks of pregnancy) and either have more work to do in my room or just pass out.  But this is my last work trip until the baby’s born.  Getting into my third trimester in a matter of a couple weeks.  Wow we’re almost there!

Anyhow, this “Trippin” post is a long time coming.  I have SO MANY images from Barcelona that I wanted to share with you all.  And as much as I tried to downsize the amount of pictures I shared, I just couldn’t.  The city is just that beautiful and amazing.

I can’t explain why I love this city so much!  It was ridiculously touristy, but there’s so much here.  History, art, music, religion, food, etc.  A little something for everyone.  I hope to go again some day soon.

I’m going to share a secret that’s not so secret, I LOVE anything blue or purple.  I LOVE it even more if you combined the two colors together.  Maybe it’s because they’re cool colors and exude calmness, which I am not.  But I have always loved purple and blue.  When I buy clothes I have to tell myself to stop gravitating towards blue or purple items.  I’m usually good about it but sometimes I’m not successful.

I know you’re saying hey it’s fall, why are you sharing an outfit post with shorts.  Because I it still is summer… especially if you’re in the Bay Area, it’s an Indian summer.  It’s cooled down this week with all the rain passing through, but it’s supposed to heat up next week, getting up to the high 70s to mid 80s.  But sadly I won’t enjoy the weather because I’m heading to the UK next week for work where it’s supposed to be chilly and rainy.  (cue sound:  whammmmmp whaaaammmppp.  you’re in the uk, stop complaining!)  Usually by this time I’m ready for fall and to take out my boots and chunky sweaters, but for some reason this year I’m not.  I think I’m still in love with the vacation we took a month ago and the association with summer and summer clothing.

Anyhow, while in Barcelona, I originally started the day wearing just a white tank top with my purple chino shorts from Banana Republic because it was supposed to be hot.  We went up to Mount Tibadabo to overlook the city and it got a bit chilly while at the elevated level, so I took my chambray button up out of the backpack and put it on to keep myself warm.  I LOVE how the outfit came together.  I love the color combo. 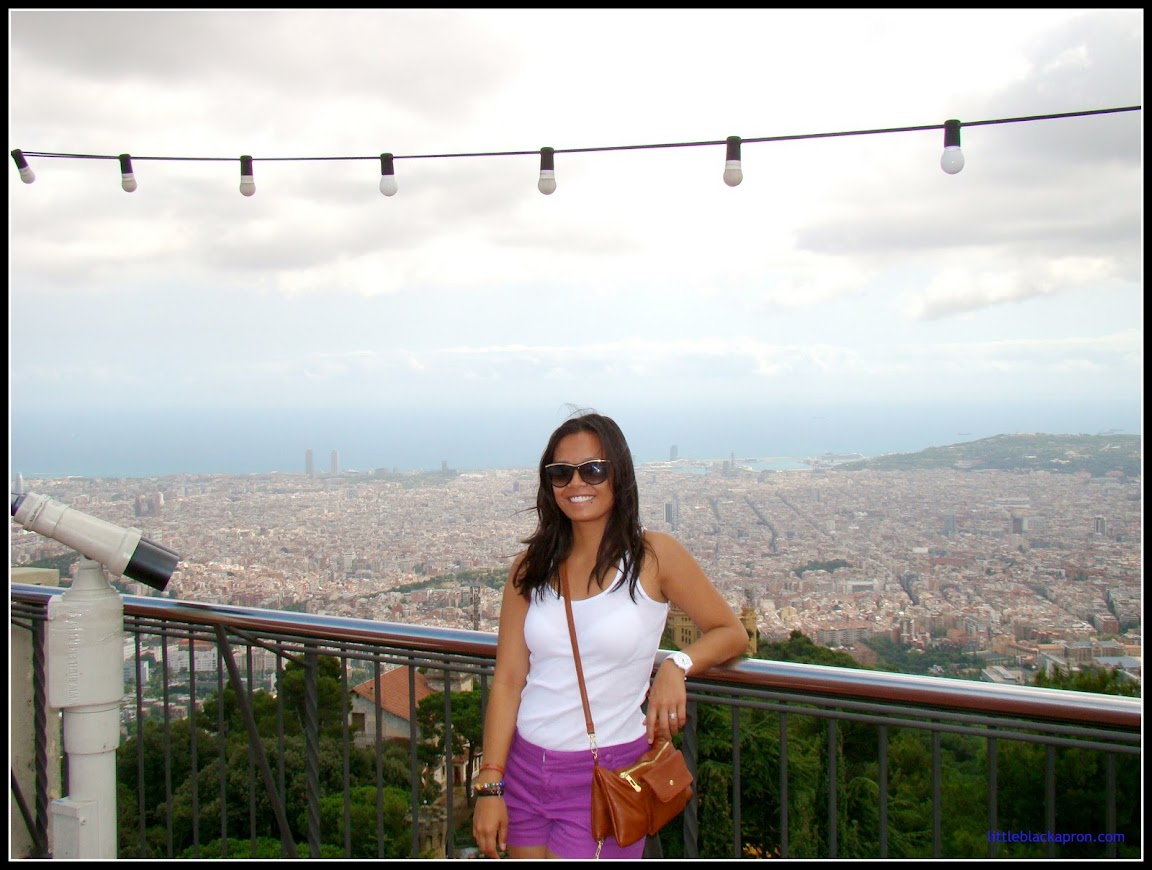 One top of Mount Tibadabo, overlooking Barcelona.  LOVE THIS CITY!  Do you see the Mediterranean Sea in the back?  ❤ 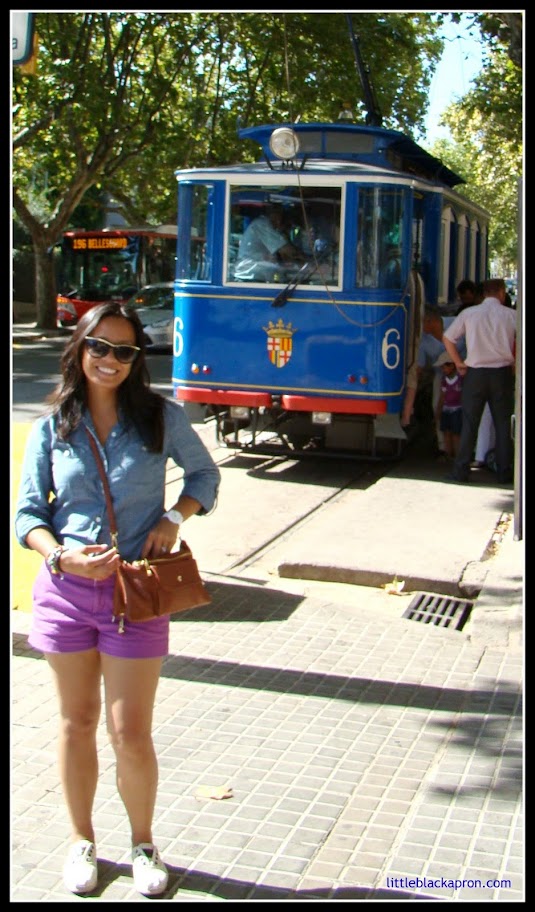 I think there may be another outfit post featuring these shorts.  With that outfit I practiced colorblocking and it was THE perfect summer outfit for colorblocking.  LOVE!

Happy Friday and have a great weekend!

First stop on our trip.  We should’ve done better research in terms of selecting which dates to go to Madrid.  We didn’t know until a couples day before we left that the World Youth Day Festival was going on while we were going to be there.  Due to WYD, the Pope was schedule to celebrate mass in Madrid and arrived the day before we arrived.  We arrived on a Saturday and the majority of the WYD attendants were headed to the Papal site (to camp out for mass the next day) via metro.  Here’s the kicker it was the SAME line that we needed to take from the airport to our hotel.  😦 It was miserable.  However with everyone out at the Papal site on Saturday and Sunday, it left the city open for our tourist adventures without ridiculous crowds everywhere.  Can’t say the same about Monday though. 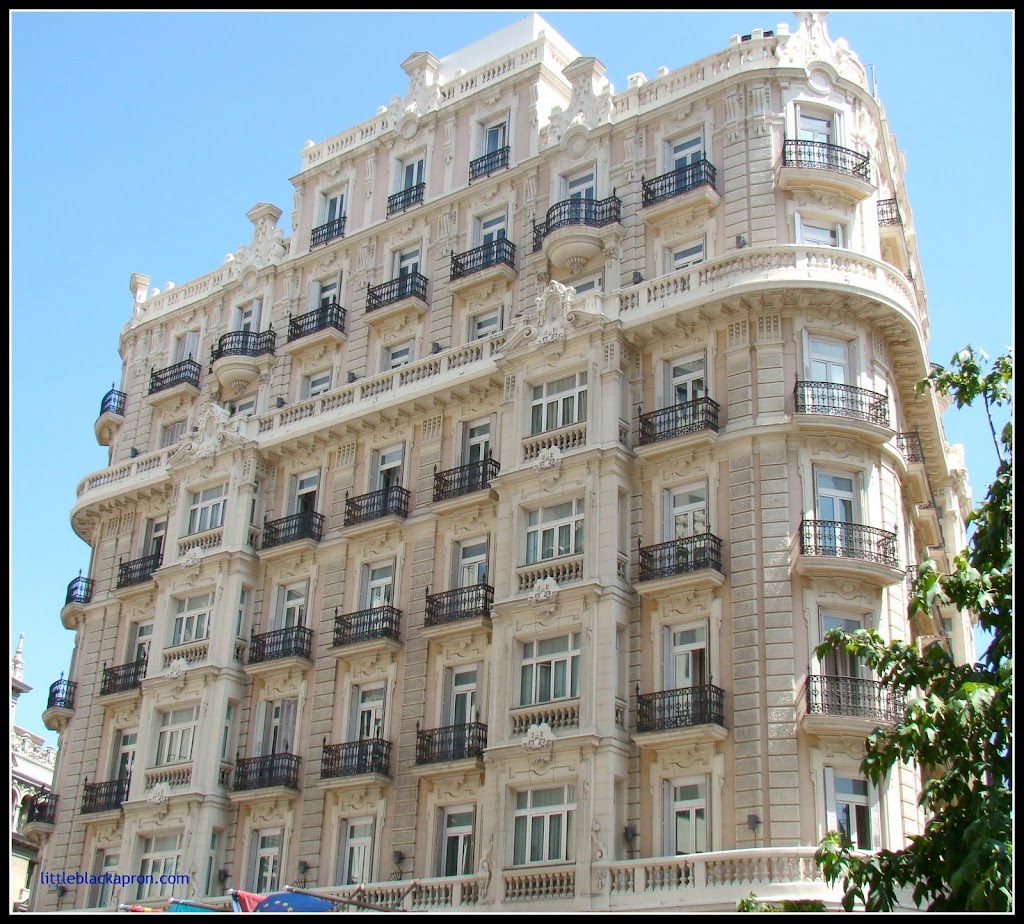 In love with the buildings 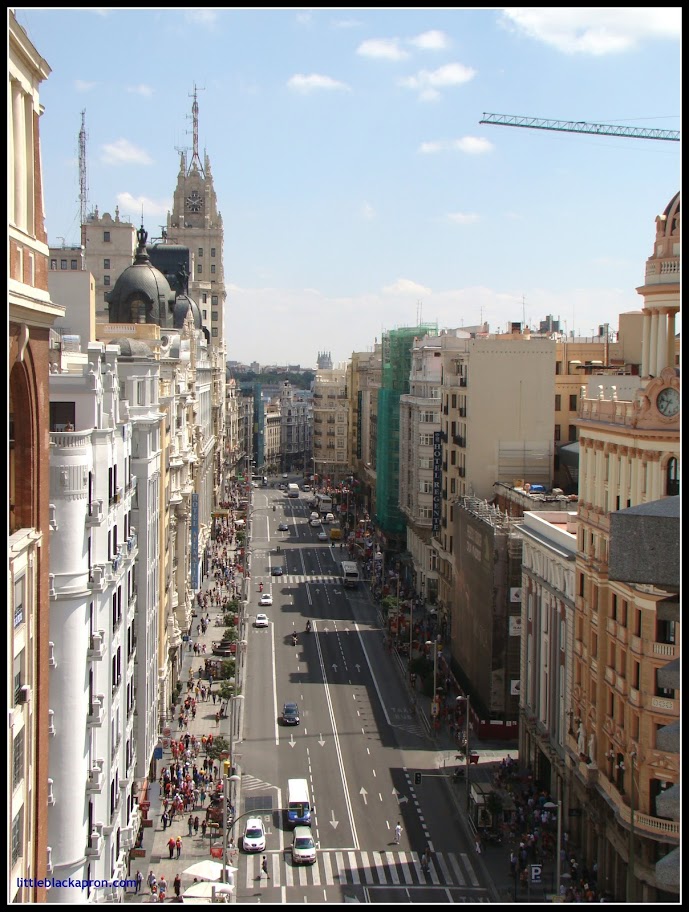 Madrid has a special place in my heart.  When I was younger, I used to come to Spain almost every Spring Break for 3 years when we lived in Naples.  My Godfather lived in Seville, so we would visit him.  We went to Madrid on one of those trips.  When we came here, my dad told me we were great great great descendants of King Felipe.  Being the gullible child that I am, I thought Felipe was his last name and we were actually related.  😛  But it gave me joy to be in front of the Palacio Real again after 20 years.  This time with my husband.  While it’s nice going to places together that neither of us have been to before, it’s also nice sharing a city with the other.  It’s a different experience and appreciation. 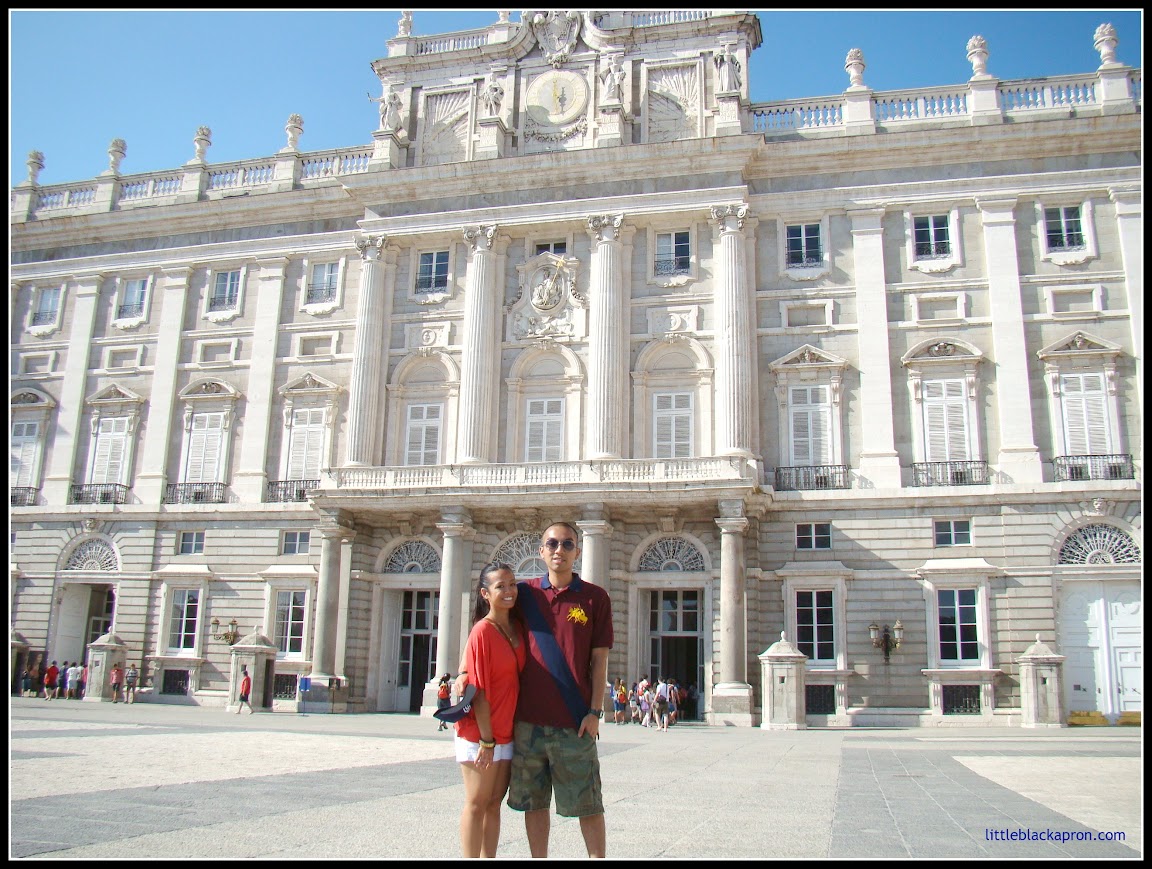 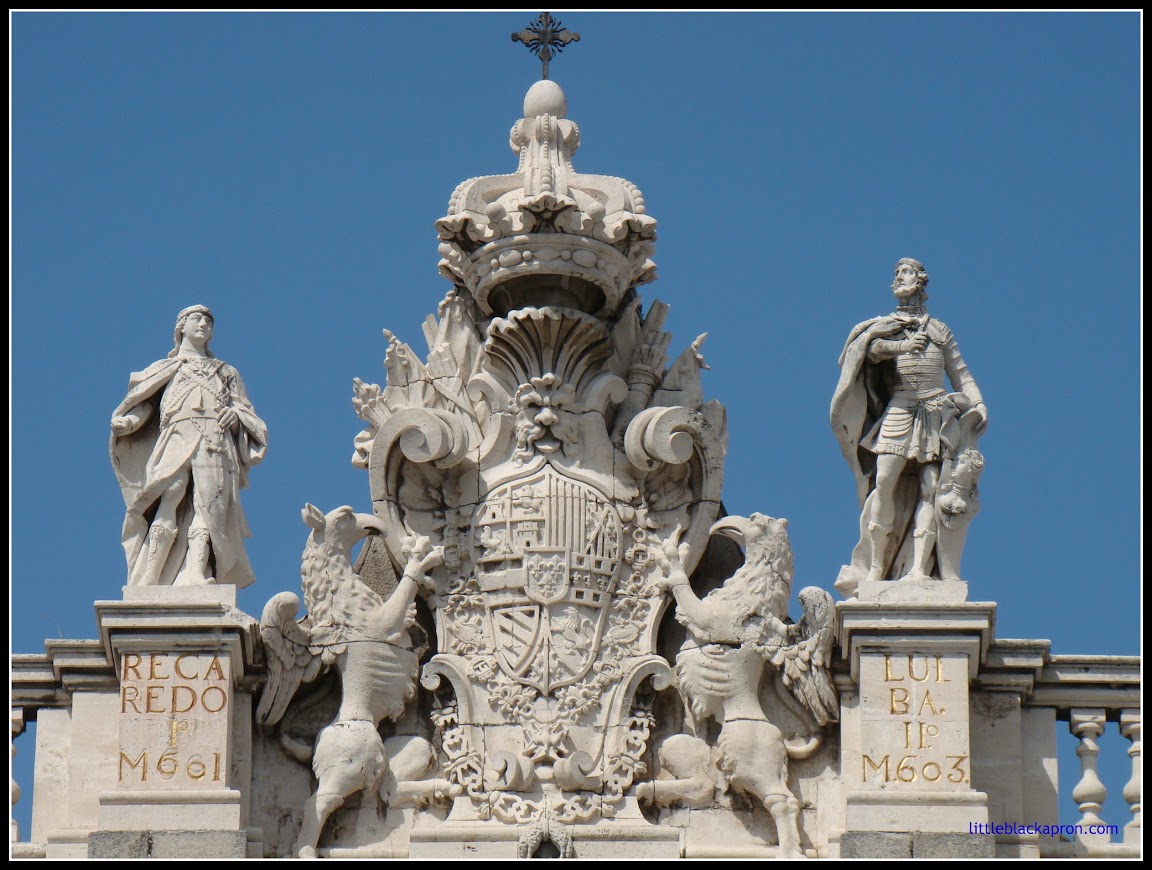 My favorite thing in Madrid?  Going to a bullfight.  While I LOVED the history and the buildings, it was exciting to do something different other than sightsee.  It is a gruesome sport and I did have to turn my head away.  Poor bulls, but it was fun.  If you watch the Madrid video, the hubs does explain bullfights are a Sunday spectacle in Spain, especially from May to October. 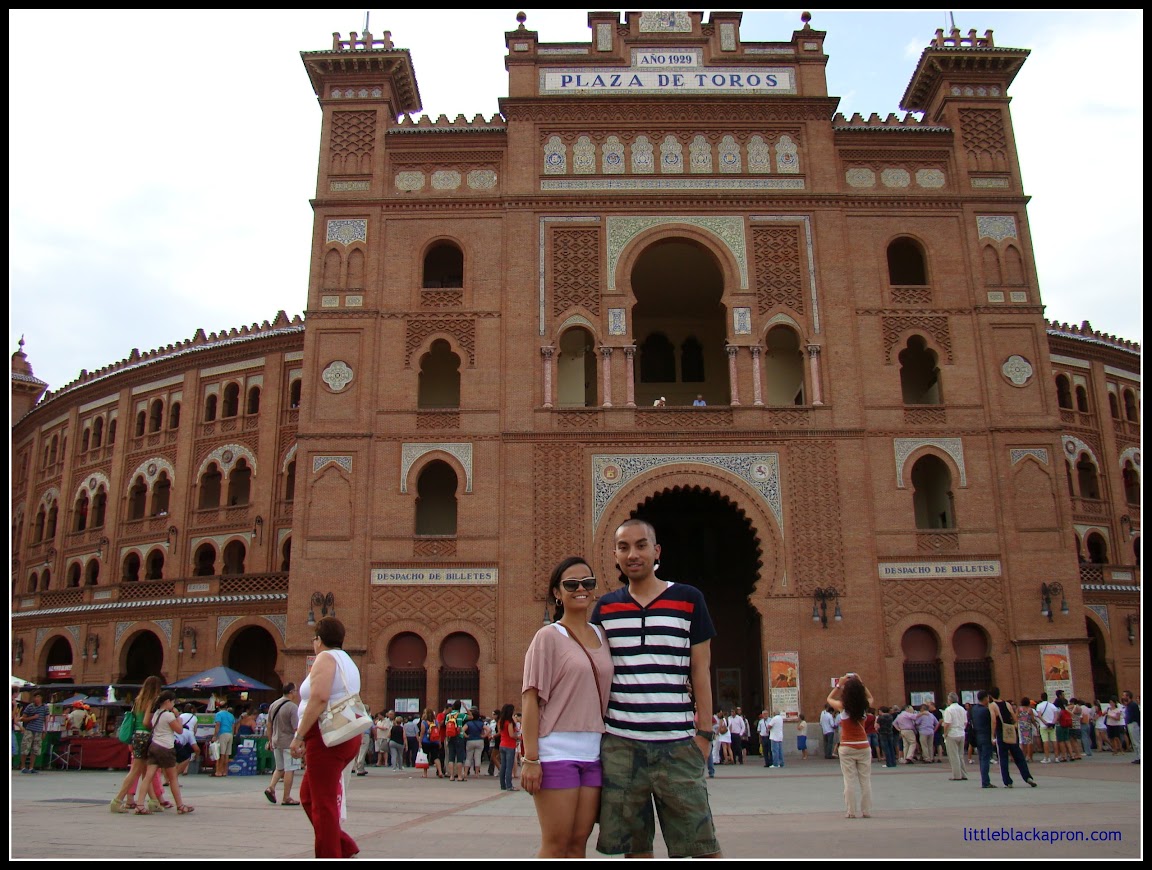 Outside the bullfighting arena. 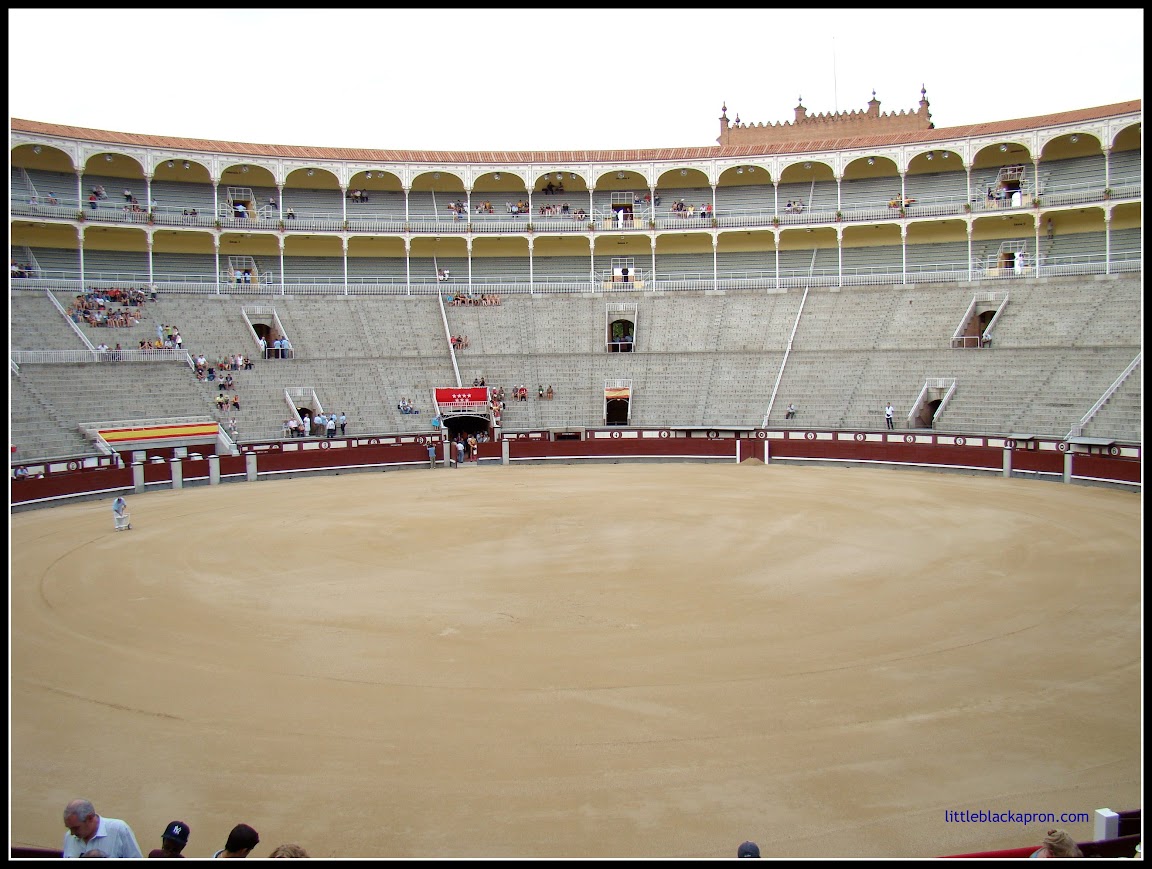 Another favorite?  Trying to have Spanish contests with the husband.  Whenever we had to ask a question or order something, we’d take turns and grade each other.  He won most of the time.  He got bonus points for speaking complete Spanish (even through it was broken) to an employee at a mobile provider store asking for data only on our unlocked phone.  I observed as this conversation was going on.  It well but it was definitely an interesting 5 minutes.

Least favorite thing?  Dealing with the crowds and loud teenagers.  I tried to tell myself, I was one at one point but that thought process was not working.  😛  Madrid would have still been touristy if WYD was not going on but I’d like to think not as chaotic at some points.  Perhaps I’m just getting older. 😦

Lets take a trip via pictures shall we? 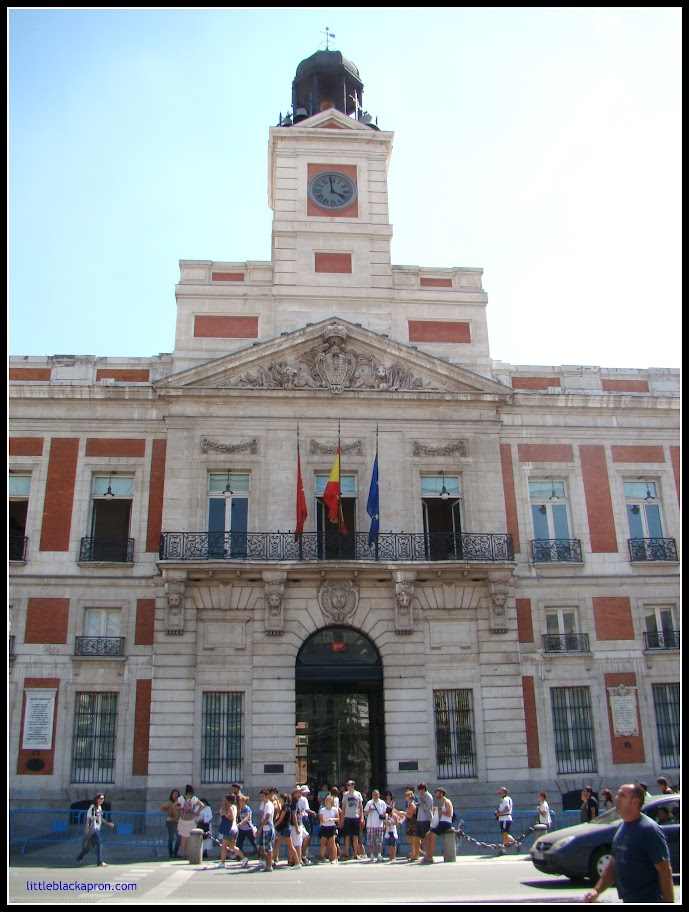 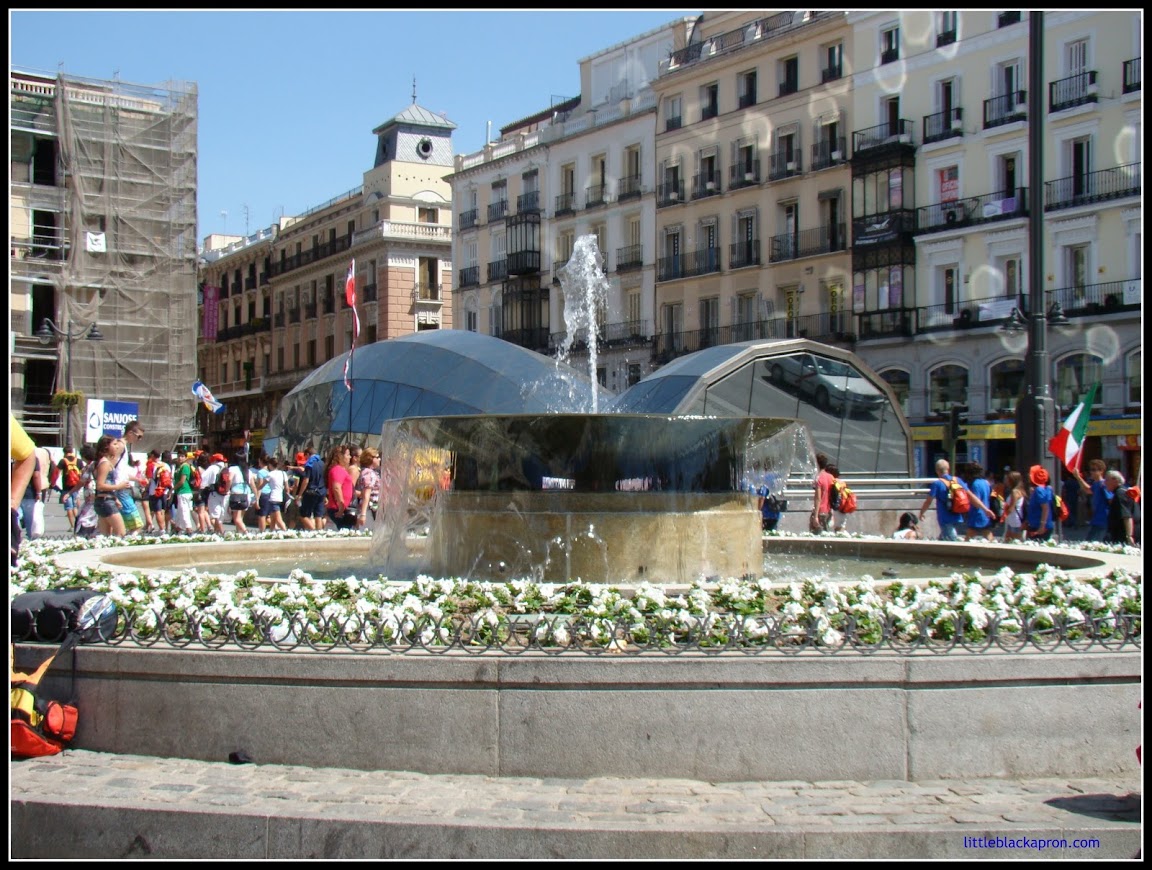 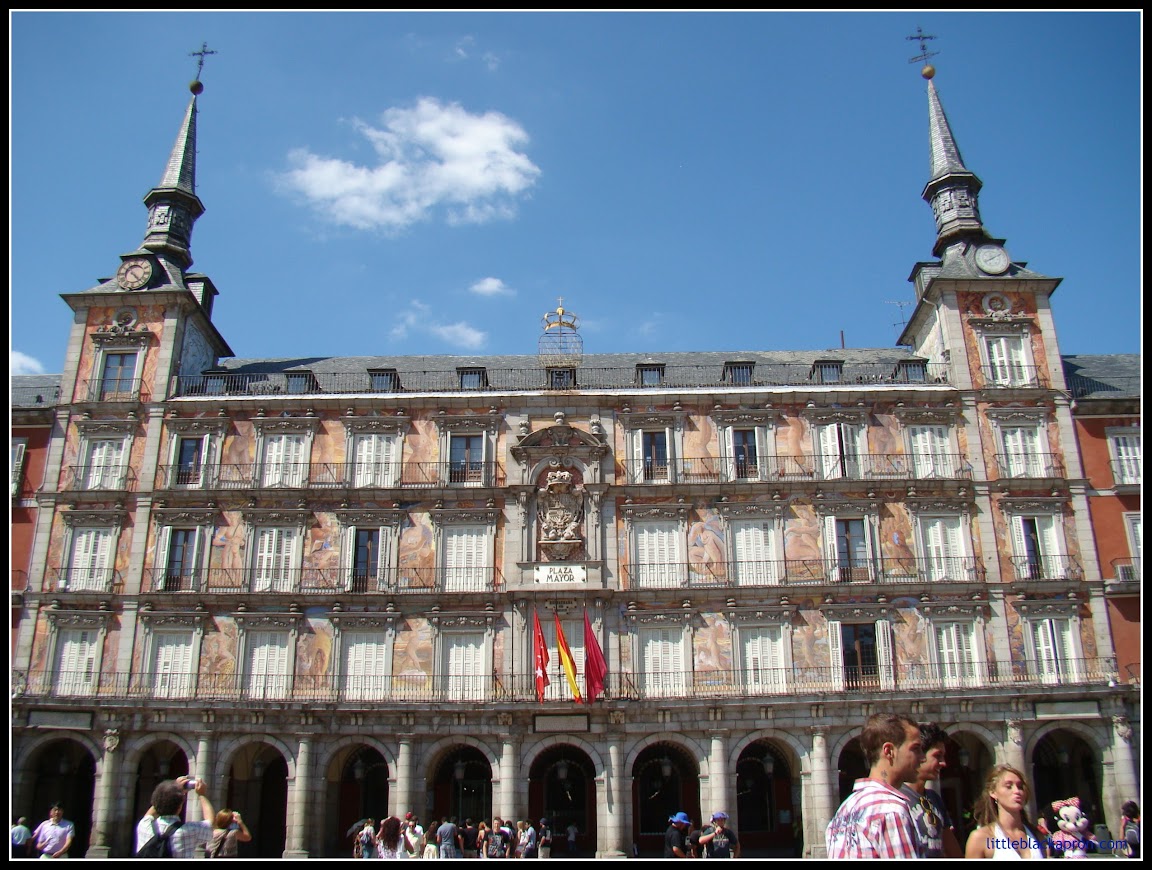 Plaza Mayor.  You may remember this if you’ve watched Vantage Point. 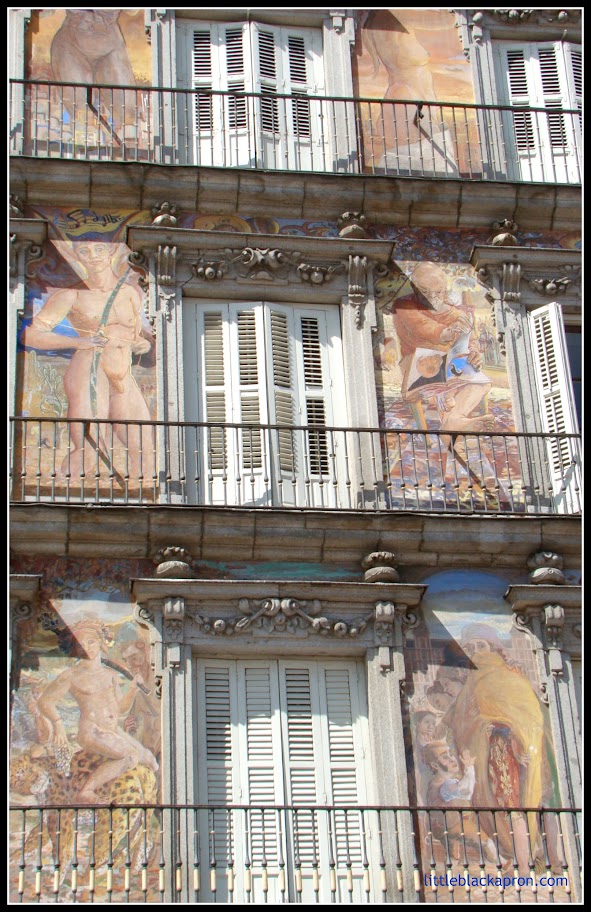 Interesting deco on the buildings at Plaza Mayor 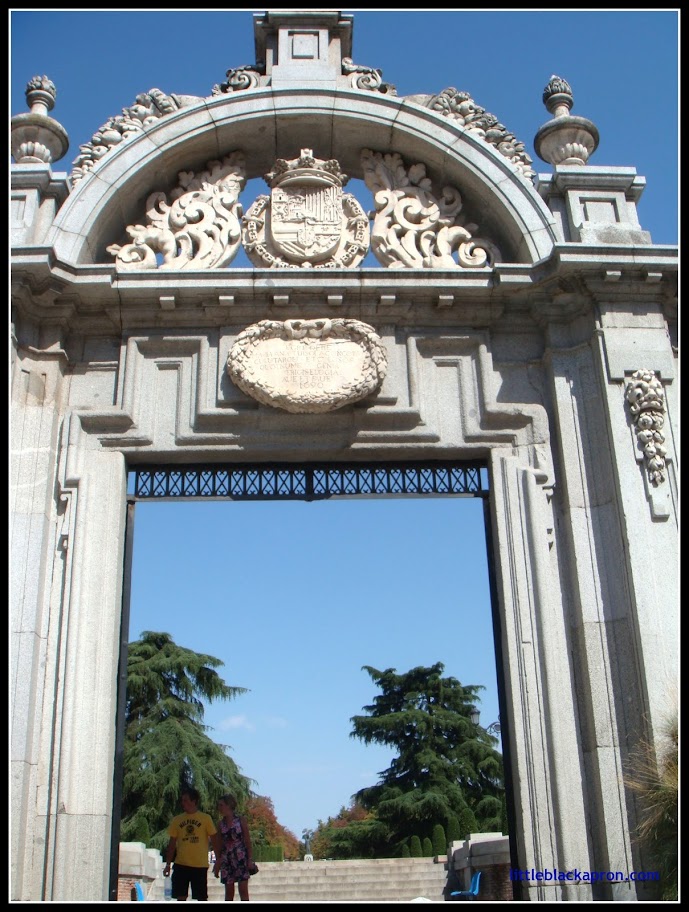 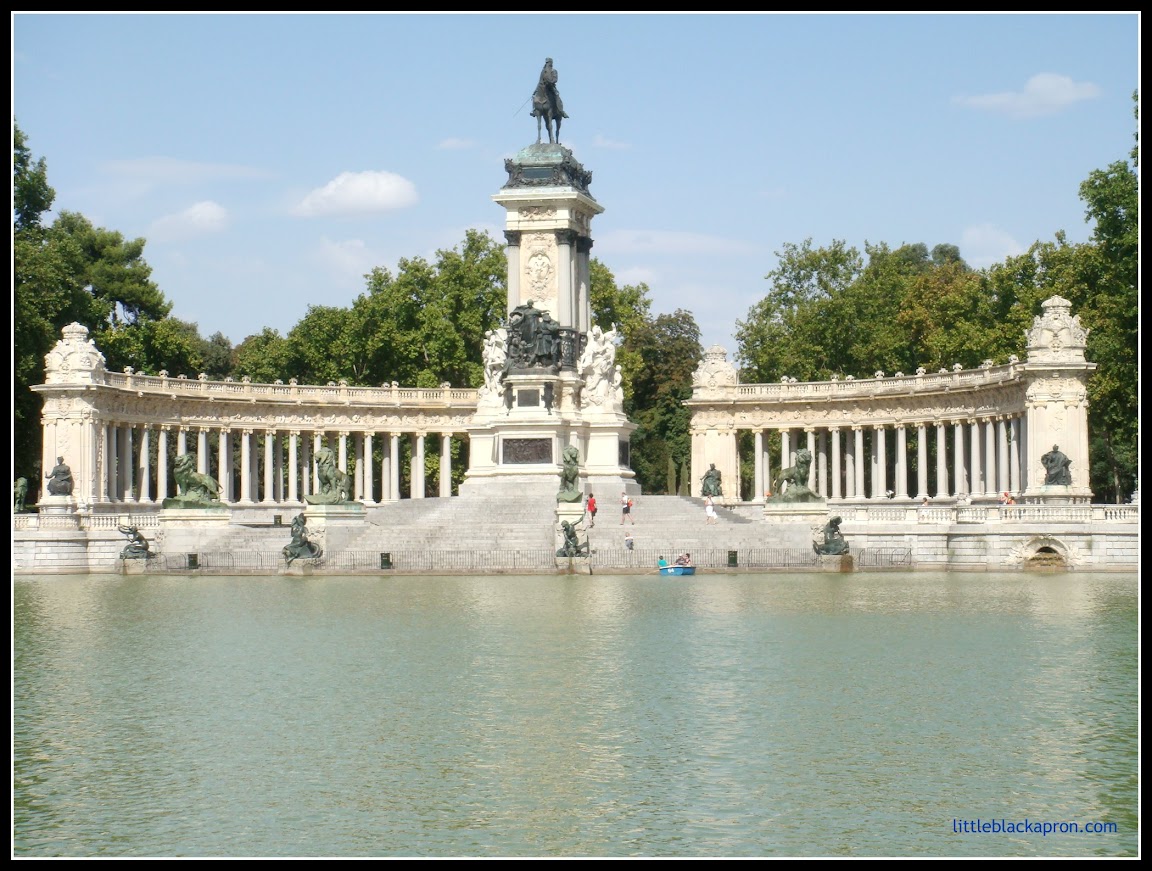 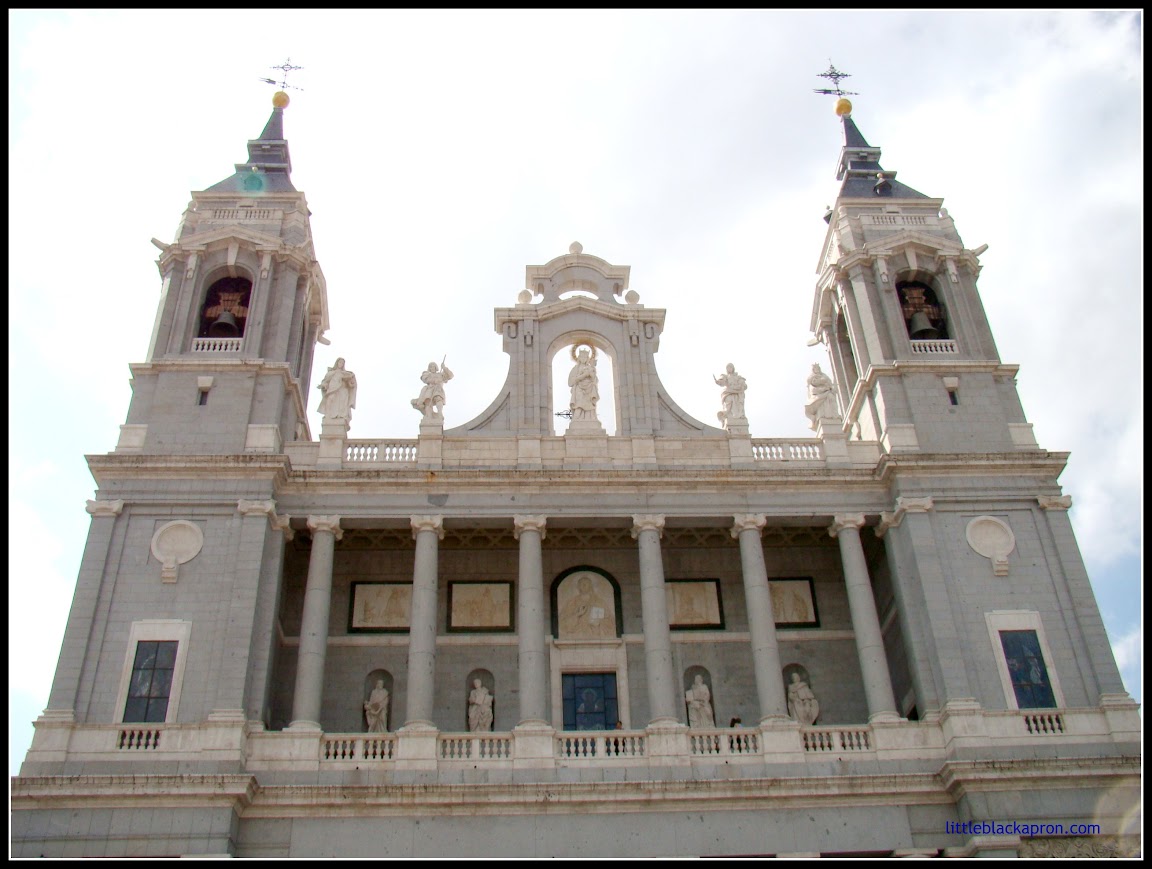 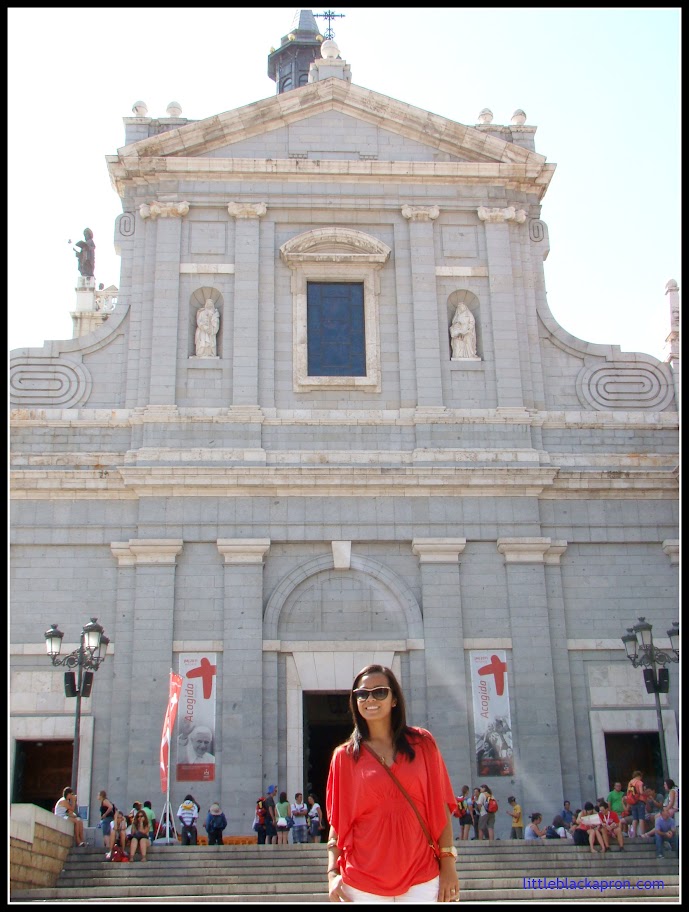 The front of the Cathedral.  See more WYD kids in the background? 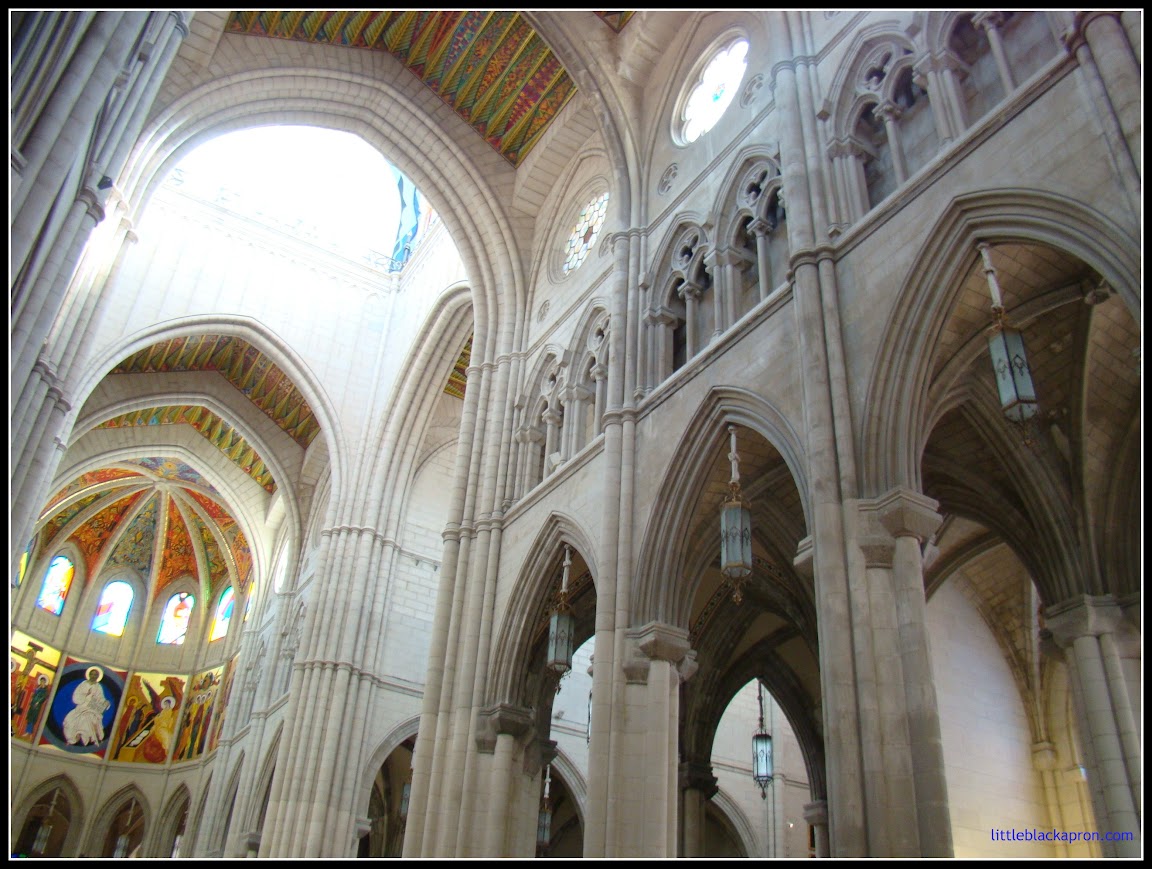 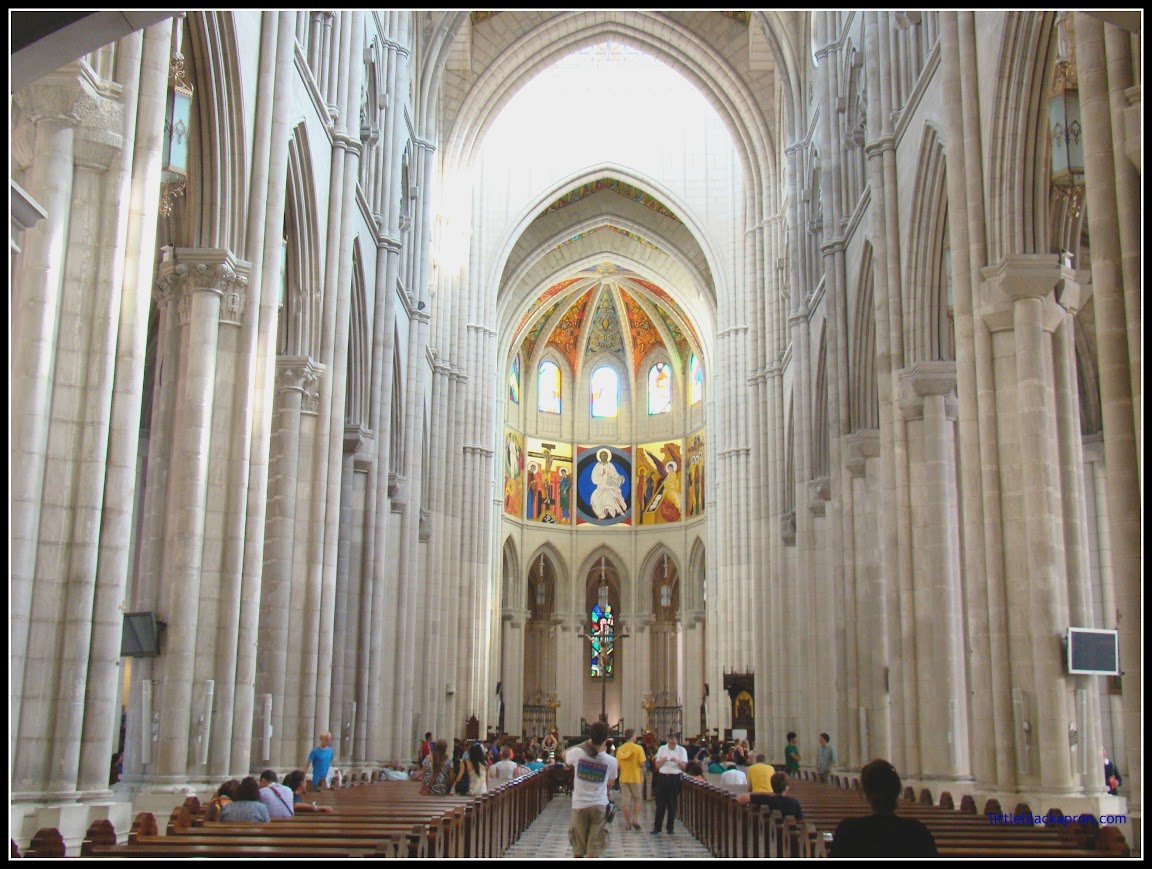 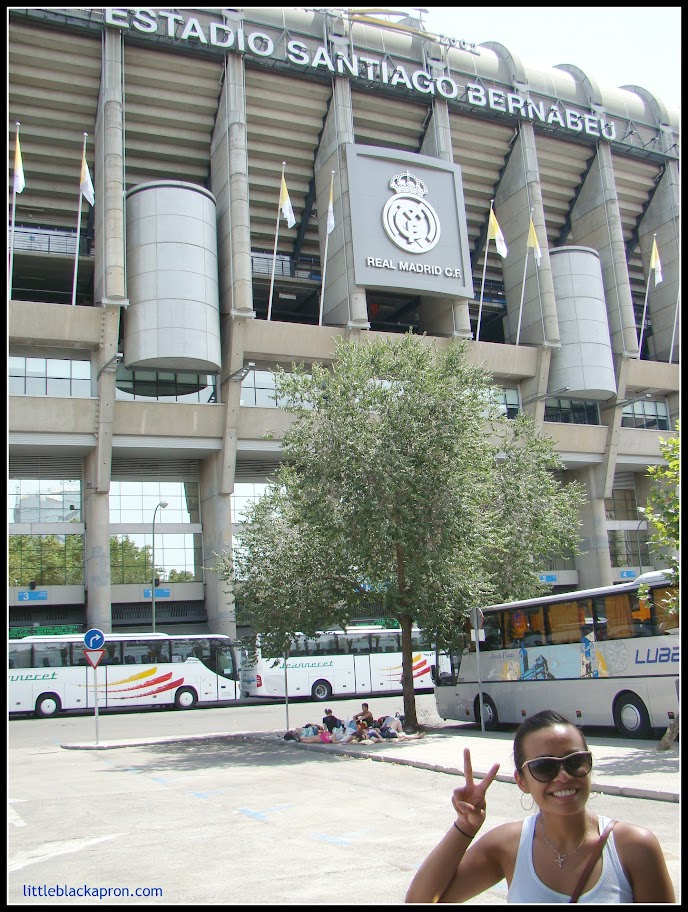 There are more photos of the various sites we visited in Madrid, but I wanted to share my favorite pictures that I took of the city.  Up next is our food adventure in Madrid.  It’s a goodie!  Stay tuned!