I can’t believe it’s March.  I can’t believe Eva is turning 9 months next week!!!  Didn’t I just have her?  Where did my baby go?  Now she’s climbing on top of everything and crawling everywhere, plus babbling.  Crazy.

Since St Patty’s day is shortly approaching, I decided to participate in the Greens for March challenge after reading Gina’s post.  If you follow me on Instagram and if you’ve been reading my blog for a while, you know that whenever possible I try to have a salad.  A lot the recipes I’ve featured here are salads.  I love a good salad.  Mother said to always eat your vegetables and I’m loving them now.  I think this “healthy” (I’m all about moderation) eating  has been one of the things that has helped me keep the baby weight off (along with other things, but that’s a post for another time).  Every week, I ALWAYS purchase spinach from the grocery store and maybe some romaine, arugula or mixed baby lettuce.  The rest of the week I add them to my salads, sandwiches or even green smoothies (if I don’t feel like a salad but want the iron and nutrients from the dark leafy greens).  So for the remainder of this month if I have a green smoothie or salad I’ll be taking a picture of said dish/drink and uploading it to Instagram with tag of #greensformarch, as well as sharing it here on my blog if it is a new recipe.  Join me!

Here’s the recipe for the smoothie I posted earlier.  Pardon the name.  I was trying to come up with something clever.  Obviously, I just came up with a difficult name instead.  😛 One of which I’m not even sure I know how to pronounce. 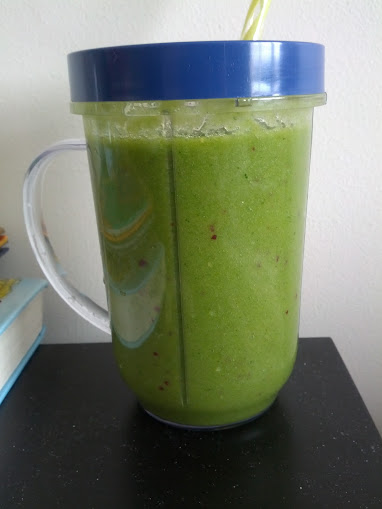 Place all ingredients into blender and blend until all ingredients are incorporated and to desired consistency.  Add more coconut water if you’d like the smoothie to be less thick.

Back to the weekly roundup posts, but I’m thinking about changing the name since I don’t always post daily and am sharing personal moments that I’ve loved or disliked during the week, rather than posts I’ve written during the week.  Trying out this title for now, but I may end up changing it.  So here are my loves for the week…

I, up until recently, had a first generation iPad, but it started slowing down.  With the Nexus 7 recently releasing, I wasn’t sure if I wanted to restore my iPad to factory settings or sell it and just not have a tablet at all or buy a Nexus.  Let’s face it, the “I’m not going to have a tablet at all because I have a personal computer” thought wasn’t going to happen.  I was kidding myself.   It’s so convenient to read blogs and surf the internet with a tablet while sitting on the couch or even while breastfeeding (sitting there for 15 to 20 minutes doing nothing can get boring).  Talk about lazy.  Anyhow, I was pedaling my feet about what to do and the hubs, who is a fan of Android phones and tablets, gifted me with a Nexus 7 for my birthday (I know I’m spoiled!).  He said I could open it and he’d help me sell my iPad or I could return it and we’d get something else like a new pair of camera lens or whatever I wanted.  I totally opened the box after a couple days and he sold my iPad (what a sad day because I took that thing everywhere:  UK, Fiji, Spain, Portugal, Morocco, all over the US).  For a Google-centric user, I LOVE IT!  All the apps I’ve purchased on my phone (which is a Galaxy Nexus), I can download on my tablet and not pay extra (Yay for having one OS to deal with instead of two).  Plus its the perfect size and weight to easily hold with one hand.  Thanks honey!

Since we’re talking about iPads/tablets, let’s talk apps.  I LOVE the app Baby Connect, which is available on both Android phones/tablets and iPad/iPhone.  My boss introduced me to it.  You’re able to log your little one’s sleep, feedings by bottles, nursing times (and which side you last left off with!  no need for rubber bands, bracelets or pins!), diapers, etc.  It even tells you, based on your child’s birth date, what percentile they’re in for height and weight when you enter that information in.  While I don’t need to log everything since Eva is almost 3 months old, I find it pretty useful.  We typically listen to her queues, but it’s great to see what time she last ate and knowing that she’s probably crying because she’s gassy or just uncomfortable.  The app costs $4.99 but I think it’s money well spent.  And you can log the information online too and add a caregiver so that they can log the information in also.

Cocktail straws on sale at target used for my smoothies.  I found it hard to drink my smoothies in glasses without a straw.  I don’t know if it was lazy or if they were too thick but it was not working for me.  I saw a couple of cocktail straws at Target but they were too pricey for my taste.  The other day while I was strolling around Target and found said straws for half the price.  Score.  Needless to say, I’ve been making smoothies like crazy.  I recently made a Spinach Fruit Oatmeal smoothie inspired by Kathy’s Oatmeal Smoothies.

I wanted to indulge a bit when making my smoothie.  While I wanted to feel healthy, I also wanted something indulgent.  Then I thought why don’t I add chocolate to this.  But cocoa powder would be too bitter.  And hot chocolate packets may be too sweet and milky.  Ah ha!  We have Nesquik!  (Yes, we have Nesquik in our house.  It’s for my husband.  He loves the stuff.)  I took a tablespoon of this chocolatey sugary goodness and added to my smoothie.  DELICIOUS!

Farmers market inspired meals.  I’ve always loved going to the farmers market and getting inspired, but with the pregnancy and after giving birth, my motivation to create new meals hasn’t been the same.  Until recently.  I’ve been trying to make a change to eat healthy (we were eating out a bit after I gave birth because it was easy and I was lazy), so I’m back to making myself fiber packed breakfast meals, salads, and sandwiches.

Frozen grapes.  I haven’t had frozen grapes in a while and had some in the fridge that were about to go bad, so I put them in the freezer.  It was nice to have a cool yet healthy treat available on a hot day.

This love is a bit of a personal moment.  Eva has found her thumb to suck on.  Previously she’d suck on her fist, trying to find her thumb, or suck on a couple of fingers at a time, but my baby finally found her thumb!  That said, she still asks for the pacificer sometimes, but spits it out and finds that she likes her thumb better.  Perhaps it tastes better?  LOL!

Note:  All images that do not belong to me have been linked back to it’s original owner.

Sorry for the delay with updates readers!  As previously stated, I was traveling internationally for work last week and unfortunately didn’t have time to post.  But I do promise loads of goodie posts, continuing with my Europe vacation, this past trip to London, foodie posts and finds in London, hauls, lookbooks, etc. So stay tuned!

Today’s Meatless Monday recipe for you is an easy but goodie.  I used to have this treat when I was younger.  Back then, I used to think my mother was weird for drinking this but I souped up the recipe to make it my own.  I have two ways to enjoy this drink, as a shake and as a smoothie.

1 avocado
1/2 cup nonfat milk
1/2 banana
1/4 cup vanilla or plain greek yogurt
vanilla whey protein (option, this is if you want this to be more filling)
1 tsp agave or sugar or sugar substitute
ice

Blend everything in a blender and enjoy.

The next recipe is my FAVE, mainly because what I substitute instead of yogurt.  NOMNOMNOM.

Avocado Shake
yes avocado can be a dessert

Put everything in the blender and blend.  Then enjoy!

Quick tip:  You can add banana to this if you don’t like the avocado flavor.  Also, try adding some cocoa too it.  I’ll save my avocado chocolate pudding for another time.  Don’t knock it til you try it!