As part of my London Haul, you may remember that I snapped up some Spanish Chorizo.  While I LOVE Mexican Chorizo especially in my breakfast burrito’s from Cafe Rosalena (OMG TO DIE!), I like the firmness and taste of the Spanish Chorizo.  It’s almost like Chinese Sausage but not really.  So I thought I’d make some paella using Rocco Dispirito’s Now Eat This recipe.  Pretty tasty.  The one modification I did make is that I didn’t use brown rice as I didn’t have any, I used arboro rice.  I would’ve used sushi rice (got my husband to convert to sushi rice from jasmine rice), but I thought it would end up being too sticky.  I would’ve also used Jasmine (long grain) rice, but I didn’t have any.  PLUS the husband doesn’t believe that brown rice is real rice aka he doesn’t like that stuff.  LOL!  I’m indifferent.  Other than that I didn’t make any variations to this recipe. 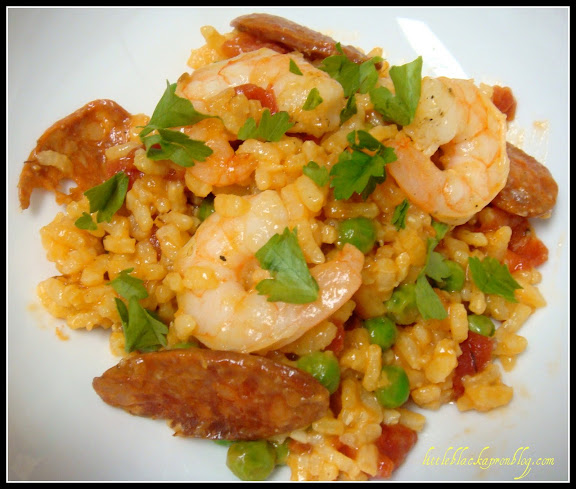 Heat a Dutch oven over medium heat. Add chorizo and cook until the fat begins to render (about two minutes).

Add garlic and saute until fragrant (about one minute). Add saffron, rice, and broth. Cover pot and bring to a boil.

Reduce heat and cook at a gentle simmer for 30 minutes. Stir in diced tomatoes and juice. Cover pot, and continue to cook another 25 minutes.

Season shrimp with salt and pepper. Stir shrimp and peas into mixture, adding more broth if the rice appears dry. Cover, and continue to cook until shrimp are cooked through and rice is tender (about 10 or 15 minutes).

Allow paella to rest for five minutes, covered. Fluff rice with a fork.

No I didn’t come up with that recipe name.  The “Now Eat This” author slash Biggest Loser chef did, Mr. Rocco Dispirito.  His Now Eat This cookbook remakes the classics but in a healthy way.  We got the book as a wedding present and I love it.  The substitutions aren’t ridiculous, you’re still adding flavor in the recipes and reducing the fat with other options.  Big Fan!  Go get a copy!  Some of his recipes can definitely be found on the internet.  He also tweets and links some of his recipes.  The bonus to this recipe – the hubs was a fan!

modifications by me in red 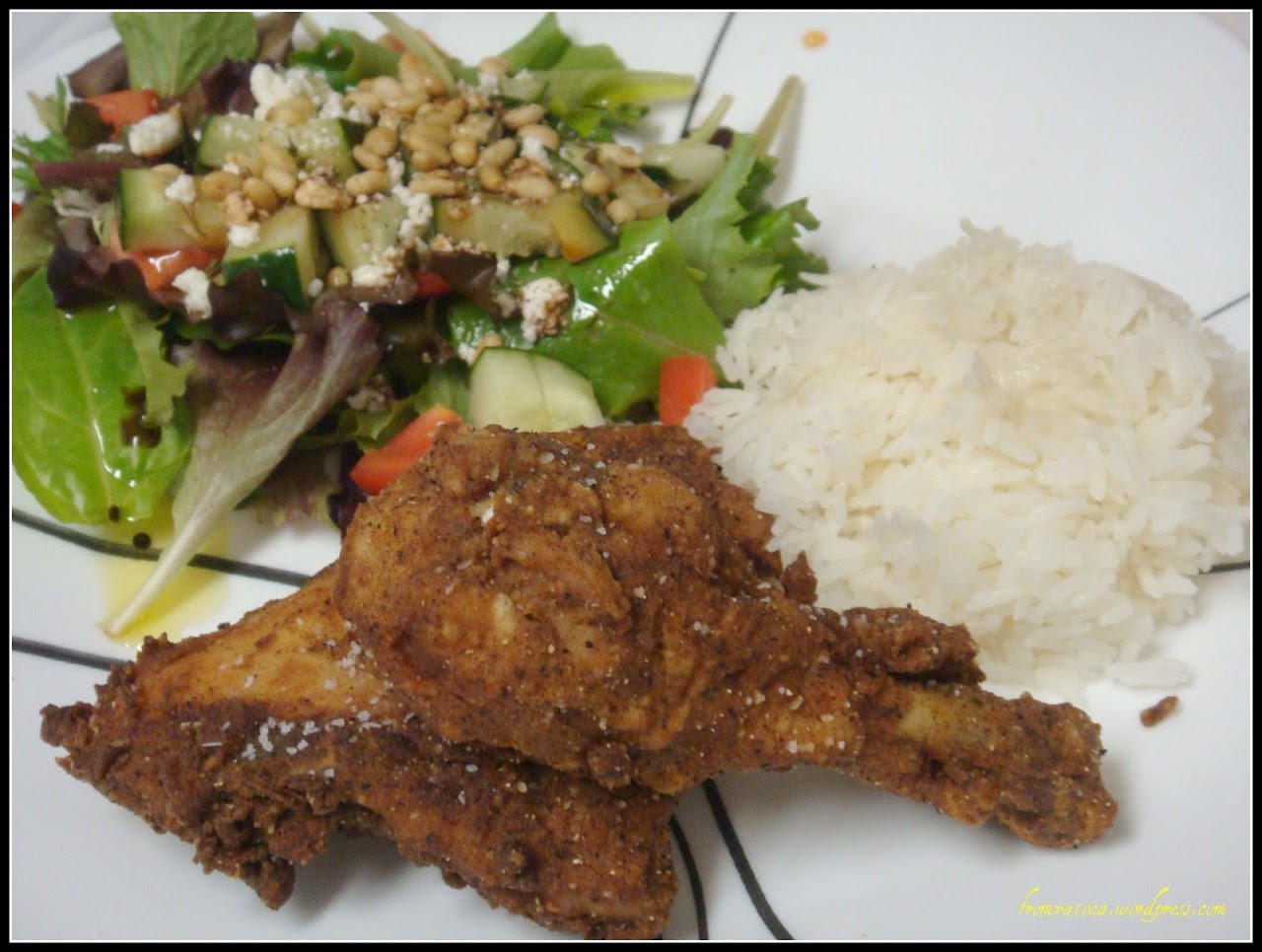 Heat the chicken broth in a medium saucepot over high heat, seasoning it generously with salt. Add the chicken thighs to the pan and bring the broth to a simmer. Cover, and reduce the heat to low. Simmer gently until the chicken is tender, about 40 minutes. Remove the thighs from the liquid, pat them dry, and set them aside on a platter; cover it with foil to keep them warm.

While the chicken is cooking, pour the grapeseed oil into a large pot with high sides, and bring it to 400˚F over high heat. Set a wire rack in a rimmed baking sheet or over several layers of paper towels (for draining the chicken). In a shallow dish, combine the flour with the paprika, celery salt, black pepper, 1 teaspoon salt, and the cayenne. Use a whisk to thoroughly combine the ingredients.

Fry the chicken, 2 pieces at a time, in the hot oil until deep golden brown, 30 seconds to 1 minute. Drain on the wire rack, and serve immediately.

Flash frying is a high-heat deep-frying technique used to rapidly brown small pieces of quick-cooking food such as tiny calamari or small shrimp to avoid overcooking them before the crust browns. Flash flying requires an oil temperature of at least 400°F—which means you have to use an oil with a high smoke point, like grapeseed oil. By poaching the chicken first and then flash frying it, I was able to eliminate 20 grams of fat and at least 250 calories from traditional fried chicken. Because the chicken is already cooked, it only has to spend enough time in the hot oil to brown the crust, which means it absorbs less oil.