I really like chicken and mushrooms.  When I first moved out of my mom’s house, I would make Chicken and Mushrooms using Campbell’s soup recipe of cream.  Yeah you know that recipe, the one that is advertised on TV and the back of the can.  😛  But I grew up and so did my taste buds and my passion for cooking.  A couple years ago, I had mushrooms in my fridge that I had to use up before going on the road and I remembered the Chicken Marsala at Olive Garden (or was it Cheesecake Factory?  I don’t remember), so I googled the recipe and found Tyler Florence’s version.  DELISH!  I tucked away that recipe as one of my faves and made semi-frequently along with chicken piccatta.  Yeah, I know I make a lot of meals using chicken.  LOL!

The other day, I had mushrooms in the fridge again that I had to use up before they went bad (I had originally purchased them for Beef Bourguignon, but it too hot outside to have stew).  I was going to follow the recipe as usual; however, as I started browning the chicken, I decided I was going to use the white wine that was open in the fridge instead of using the Sherry (which you can substitute for Marsala) I had just purchased.   I added a touch of heavy cream and it turned out pretty well if I do say so myself.

The next chicken and mushrooms recipe I REALLY want to try out is Julia Child’s Chicken with Port and Mushrooms.  It just sounds and looks so YUMMY.  Hopefully it will make an appearance here. 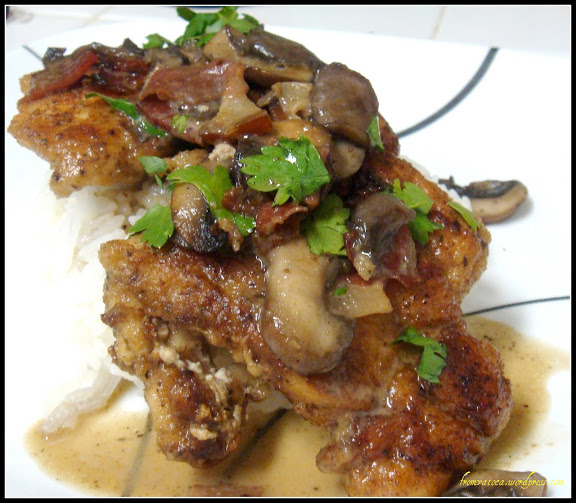 4 skinless, boneless, chicken breasts (about 1 1/2 pounds)
All-purpose flour, for dredging
Kosher salt and freshly ground black pepper
1/4 cup extra-virgin olive oil
4 ounces  speck, thinly sliced (When I’ve made this in the past I omit the prosciutto)
8 ounces crimini or porcini mushrooms, stemmed and halved (I used baby bella because that’s what I had.  Use what you have on hand)
1/2 cup   white wine (If you want to make actual Marsala, you could also use Sherry wine if you don’t have Marsala)
1/2 cup chicken stock
2 tablespoon unsalted butter
1/4 cup chopped flat-leaf parsley
2 tbsp heavy cream

Put the chicken breasts side by side on a cutting board and lay a piece of plastic wrap over them; pound with a flat meat mallet, until they are about 1/4-inch thick. Put some flour in a shallow platter and season with a fair amount of salt and pepper; mix with a fork to distribute evenly.

Heat the oil over medium-high flame in a large skillet. When the oil is nice and hot, dredge both sides of the chicken cutlets in the seasoned flour, shaking off the excess. Slip the cutlets into the pan and fry for 5 minutes on each side until golden, turning once – do this in batches if the pieces don’t fit comfortably in the pan. Remove the chicken to a large platter in a single layer to keep warm.

Lower the heat to medium and add the  speck to the drippings in the pan, saute for 1 minute to render out some of the fat. Now, add the mushrooms and saute until they are nicely browned and their moisture has evaporated, about 5 minutes; season with salt and pepper. Pour the  white wine in the pan and boil down for a few seconds to cook out the alcohol. Add the chicken stock and a splash of heavy cream and simmer for a minute to reduce the sauce slightly. Stir in the butter and return the chicken to the pan; simmer gently for 1 minute to heat the chicken through. Season with salt and pepper and garnishwith chopped parsley before serving.