I ALWAYS have plain non-fat or 2% greek yogurt in my refrigerator.  If don’t have greek yogurt in my refrigerator, I get frustrated and start feeling guilty.  I don’t drink much milk (except for in coffee or tea or if its flavored), so my calcium comes from other means such as yogurt, cheese, spinach, and best of all ICE CREAM!  It’s a staple for me to have in our house.  I use greek yogurt for both savory and sweet dishes.  My main go to use of greek yogurt is a berry breakfast parfait.  Quick and easy.  Some granola, yogurt, berries, nuts, and agave or honey, DONE!  Breakfast with protein, fruits, good fat, and calcium.  My second go to is smoothies.  But I’ve also made banana nut muffins with them before and they turned out pretty moist.  For savory dishes, I use them in dips that require mayo or sour cream.  Even if a recipe requires a dollop of sour cream and I don’t have any on hand, I’ll use my trusty greek yogurt.  My next savory adventure with greek yogurt will probably be tandoori chicken or mustard-yogurt marinated chicken, but the I haven’t tried it out yet.  I’m hoping my taste tester (the mister) is up for those adventures (he’s not a big Indian food fan).  Anyhow, after I started eating greek yogurt I couldn’t go back to regular Yoplait or Dannon yogurt basically due to texture alone.  Greek yogurt is so much CREAMIER plus it has more protein that regular yogurt keeping you fuller longer.

I wanted to have an egg salad sandwich for lunch the other day but without all the calories.  I still wanted a little bit of mayo flavor, so instead of using a two tablespoons of mayo, I used one tablespoon of light mayo (or fat free if you would prefer not to intake all those calories.  I used light because my husband doesn’t like fat free and it’s a compromise between regular and fat free.) with a tablespoon of non-fat greek yogurt.  Creamy and tasty!  You could even make this recipe without adding the mayonnaise, if you’re not a big fan of mayonnaise.  You could probably use the mayo and greek yogurt method for shrimp louie salad or tuna salads or like I mentioned above dips!  I have a great recipe for a greek yogurt dip that I’ll be sharing with you all next week (it’s actually making an appearance in the picture below).

NOT YOUR MOM’S EGG SALAD SANDWICH

recipe by me
makes one sandwich 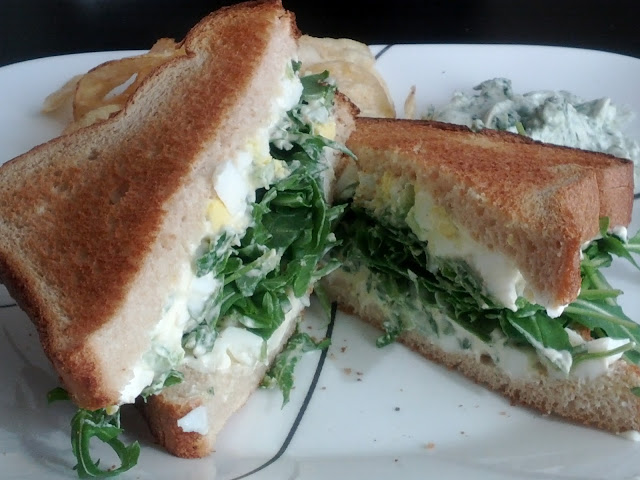 1 hard boiled egg, peeled and chopped
1 tablespoon non-fat or light mayonnaise
1 tablespoon non-fat or 2% greek yogurt
2 tablespoon chopped green onion
1/2 stalk of celery, chopped
Salt and pepper (to taste)
Wheat or multigrain bread (We’re eating healthy here people!)
Green of choice (I chose arugula because I like the peppery taste against the creamy egg salad.  In the UK they pair their egg salad sandwich with watercress)

Toast bread slices.  Assemble egg salad and greens between the bread slices however you desire.

Recently, I’ve read a couple blogs where bloggers have featured Fruit and Vegetable Smoothies, more so green smoothies featuring kale or spinach.  I decided to give it a try and see what the hype was about.  The result?  DELICIOUS.  You could hardly taste the kale.  The sweetness of almond milk and frozen berries helped.  I wish I had flavored whey protein to add into the smoothie to serve as a supplemental meal, but I don’t have any so I improvised and used flax seed instead.  Felt good knowing that I was consuming something with a ton of antioxidants, fibers, nutrients, etc.

Place water and kale leaves into the blender.  Blend until the leaves are no longer visible and appear to be “juiced.”  Place the remaining ingredients and blend again until smoothie.  If you desire it to be sweeter, I suggest adding agave or stevia/truvia sweeteners.  Enjoy!

Will you try this new green smoothie fad?  How about replacing your meals with a supplemental drink?