We’ve been in the Bay Area for almost 3 years and we haven’t explored California as much as we’d like to due to laziness, my travel schedule, etc.  A couple weeks ago we decided to take a day trip somewhere.  We were thinking Muir Woods (especially after we seeing Rising of the Planet of the Apes… ha!), but because it’s a hiking trail we had to scratch that idea (if it was just walking it would be fine, but my center of gravity is off and I’m more clumsy than usual, so hiking rocks and trails would not be ideal.  I was already a klutz before the pregnancy, multiply that by 3 times now).  Then we thought about going north (the most Northern place we have been to so far is Napa or Tahoe).  The hubs suggested Point Reyes, to enjoy the park and taken in the sights of the Pacific Ocean from a lighthouse, BUT it was a walk from the parking lot to the lighthouse PLUS 300+ steps to get to the top of the lighthouse.  I walk everyday, since that’s my method of exercise these days, (jogging hasn’t happened since the end of my first trimester due to a pulling sensation I get in my lower belly), but over exertion was a concern, so we scrapped that idea for another time.  Good news is we can bring babygirl with us to these places after she’s born.  Perhaps the fall?  Perfect weather (remember Indian summers!) in Northern California too at that time.  Put her in the Bjorn, Beco, Moby Wrap, etc. and take her with us.  Can’t wait!  So we decided on Monterey.

The hubs planned out where to go.  Our first stop, 17 mile drive.  I can’t believe how many golf courses (Pebble Beach anyone?) there are in this area!  But the views are ABSOLUTELY stunning.  The forest, the ocean, the rough waves, the Cypress trees, the beautifully kept golf courses (hubs was loving it!), etc.  No wonder why they charge almost $10 for non-residents to drive this scenic road.

View from one of the lookout points.

At one of the beach picnic areas.

This lookout point was called the Restless Sea.  Look at those waves!

The Lone Cypress tree, growing out of a rock.  It would’ve been more impressive if they didn’t have string holding the tree up, but I suppose due to erosion, the rock that the tree is growing out of is starting to deteriorate.

Another Cyrpress tree.  Completely fascinated by the trunk of this tree. 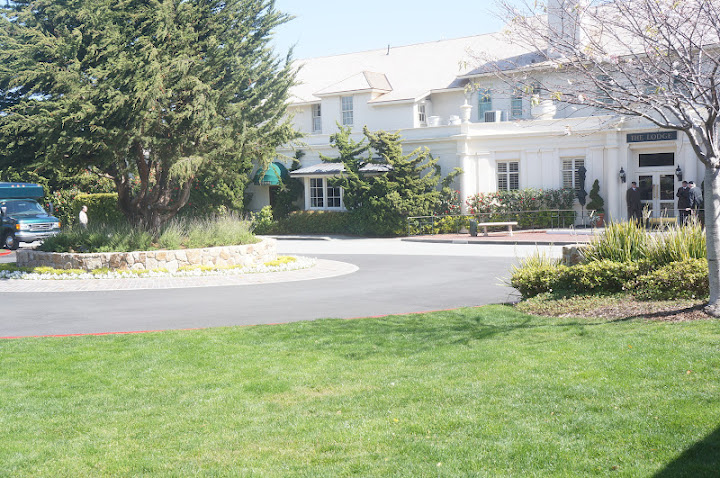 The lodge at Pebble Beach.  No we didn’t go in.

Then after 2 hours at 17 mile drive, we made our way to Cannery Row.  This area used to be known for canning fish.  The name may sound familiar because it’s the same title as Monterey County’s novelist John Steinbeck’s book.  There are a tons of retro signs and posters that say so-and-so Canning Company.  As it’s a tourist area there are several wine shops, souvenir shops, seafood restaurants, etc. to stop into.  The thing that fascinated me about the area was the buildings which appeared to be from the 1920s or whenever the canning companies were last in this area.  It’s that western, old town, general store type scene.  We walked down the street and stopped into a restaurant for some seafood.  We did not go wine tasting obviously nor did we go to the Monterey Aquarium ($32).  We would have but the price tag was a little steep and it was 4 by the time we finished with our late lunch, so we wouldn’t have spent much time in the Aquarium (since it was a Sunday).

See the general store look I mentioned.  Very western like.

Cute caboose they turned into a book store.

There’s definitely more that you can do in Monterey than what we did.  My husband’s cousin suggested we do an overnight trip.  There are a couple of wineries in the area, so you could go wine tasting there or at the shops on Cannery Row.  You could go to the Aquarium.  You could also go to the Fisherman’s Wharf (we did not, we’ve had our fix of the SF one).  I think we saw people hang gliding too, so there’s definitely a lot to do.  If you want to enjoy the beach I suggest you go late summer, but that’s with any beach in Northern California.  The water is warmer in the later months.

In a couple weeks, we’re going on another California road trip to LA!  Yes, we’ve been there before and we have taken the drive up the PCH from LA to SF.  We’re still taking the PCH, as it’s the more scenic route as opposed to I-5, since the Pacific Ocean will be directly to our right as we drive down the coastline.  Think of any movie in LA, with someone driving down the coastline.  Kind of like that, but we’re not driving a convertible.  This will be our last trip before the baby arrives, so it’s a bit of a babymoon.  We’ve been talking about going to LA for a while (to visit friends and just see more of the area).  I just hope the 5-6 hour drive isn’t too uncomfortable.  I can’t wait!  Mulholland Drive, Melrose Trading Post, Fashion District, Santa Monica, etc.  Beach, scenic landscapes, fashion, food.  I’ll be in heaven!

Have you taken a quick day trip recently?  It’s fun to discover your city or nearby cities.  I suggest you try it!  Any suggestions for weekend road trips in California?  Yosemite and Mammoth are areas we haven’t been to, but are on our list.  Yosemite would have been ideal last fall.   Mammoth too, but I can’t snowboard.  Any suggestions for day trips around the Northern California area?

One thought on “Trippin – Monterey, CA”