So from Madrid we flew to Marrakech via EasyJet (regional European airline… it is AWESOME.  When they have their deal going on you can go to anywhere in Europe for 5 euros each way but of course they add on taxes so it ends up being 30 to 50 euros round trip which isn’t bad at all).

Marrakech was what I expected it to be but different.  I’m not sure how to explain it in words.  It was a different cultural experience for me because I had never been to an Arab country before.  I’m happy that we went.  Traveling is about experiencing new things and new cultures.

The riad we stayed at was Riad Les Trois Palmiers, which was tucked away in an alley.  It was 15 minutes away from the main square, Jemma Al Fina, but away from it enough that we didn’t hear the noise from the square.  The riad was BEAUTIFUL.  I wish I had better pictures to show you.  The video of Marrakech best displays our riad.  Some afternoons we would spend time in their small pool in the courtyard/living room area to cool down.  Riads are built with the center of the house being a courtyard and open air to cool down in the hot desert.  Anyhow, upon our arrival the staff greeted us with Morrocan mint tea and pastries.  At night, our room (which was one of the smaller rooms in the riad) was on the terrace so we would hang out there sipping on mint tea. 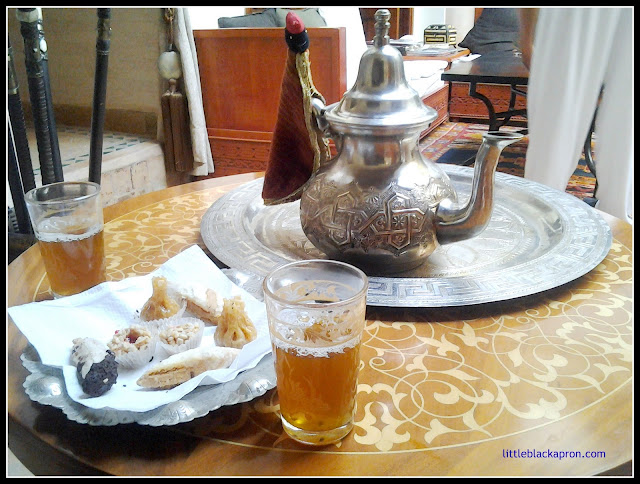 Overlooking the square as the food vendors set up their stations for dinner.

LOL!  Oh tourists… This guy wanted a picture with one monkey until the guy in brown came with his monkey.  Then both owners asked the tourist to pay for photos with both monkeys.  Oh and the monkey on the left pooped on the wife’s purse right after this.  SIGH! 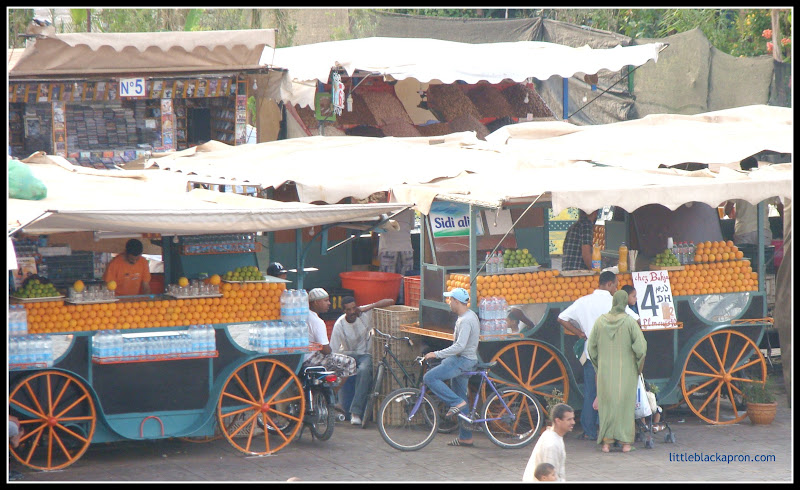 I wish I could’ve taken a pictures of the souks and all the awesome colors of the shoes, pillowcases, clothes, scarves, tagines, spices, scarves, etc. but before arriving I read that you should not to take pictures of the store owners or their merchandise, so I didn’t want to risk it, except for the one below as I was across the street and no one was around.  😛

Spice bins at the souk

The hubs said he saw a woman take a picture of something in the souk and the owner was yelling at her for a while.  :-\  But the colors of the merchandise was amazing, bright and radiant.  Actually anywhere you go in Marrakech, lots of colors everywhere, against the clay background… GORGEOUS!

One of the seven entrances into the medina

The wall surrounding the medina, built hundreds of years ago for protection from intruders.

Jardin Majorelle, which used to belong to Yves Saint Laurent (hence the memorial of a rock for him here)

Lots of blues all over the garden

I LOVE Arabic architecture… I LOVE the archways.  LOVE!

Courtyard of Palais Bahia.  This palace was built for 4 of the Sultan’s 20 wives or something like that. 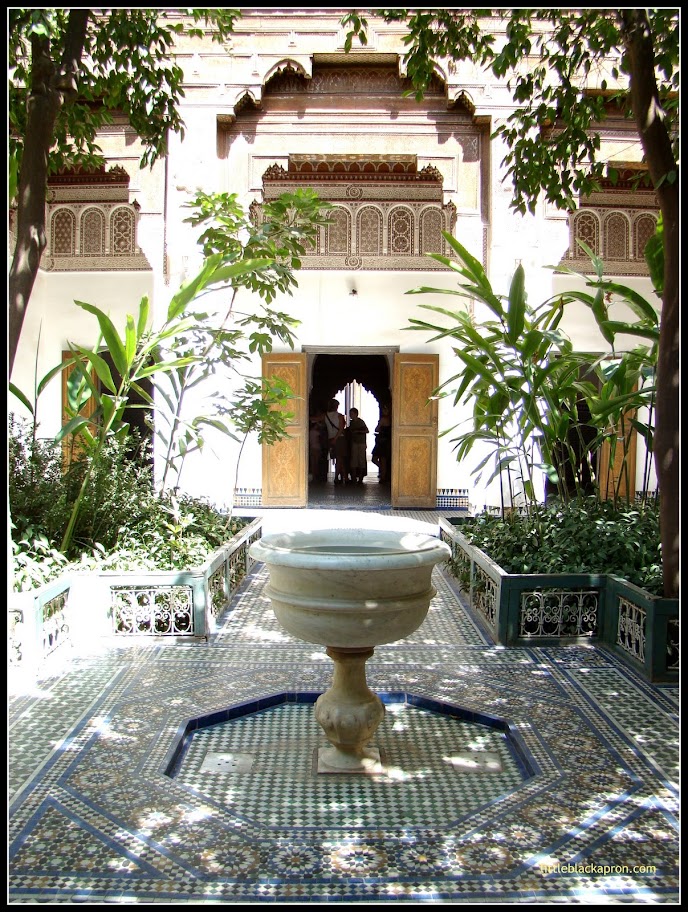 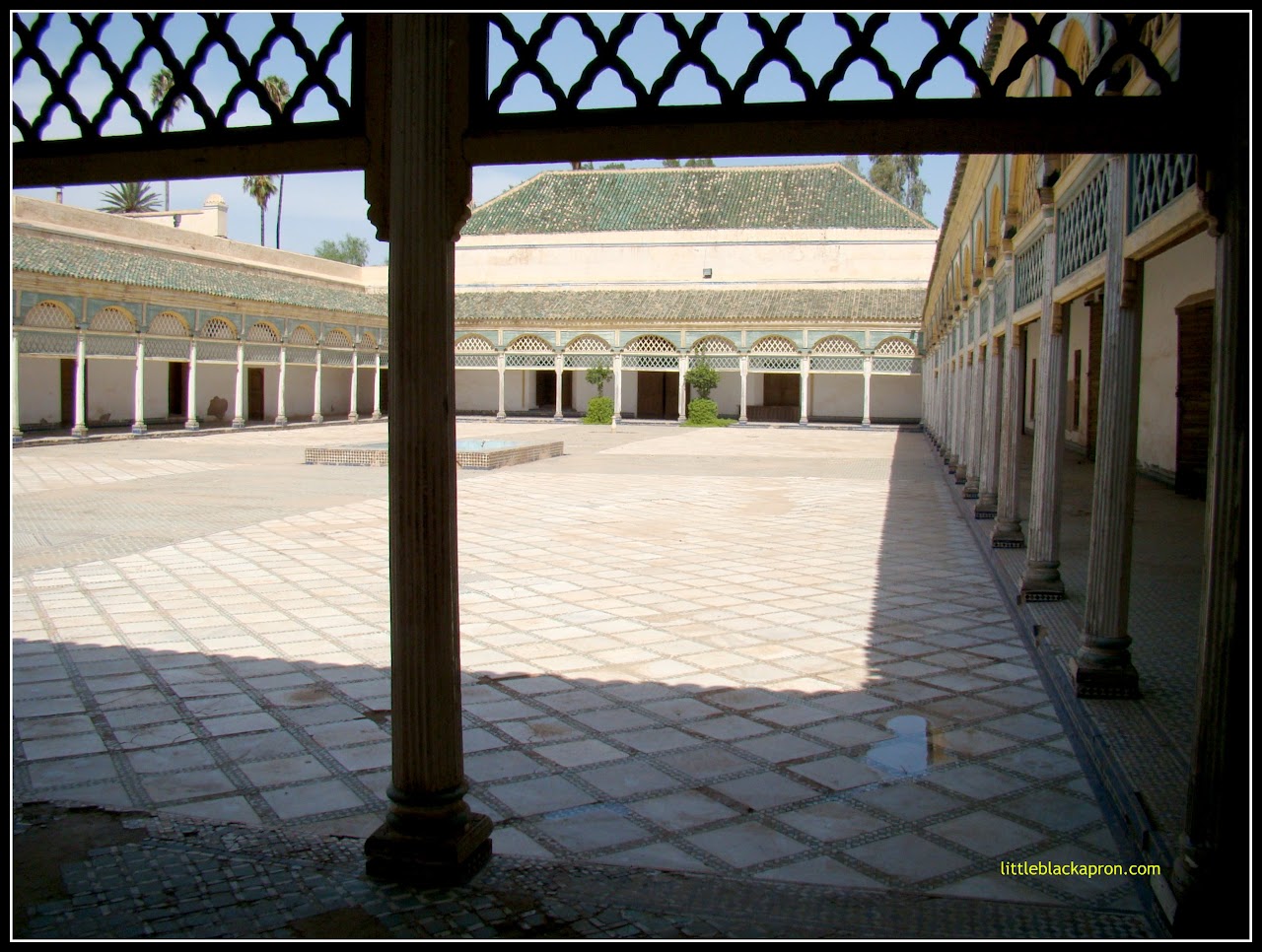 Another courtyard in the palace.

For my birthday, I contemplated if I wanted to go a traditional Moroccan spa or ride a camel.  I decided that I should do something a little different and adventurous, so we signed up for a camel ride excursion the morning of my birthday.  Good thing we went in the morning, that desert sun was BEAMING come 11am. 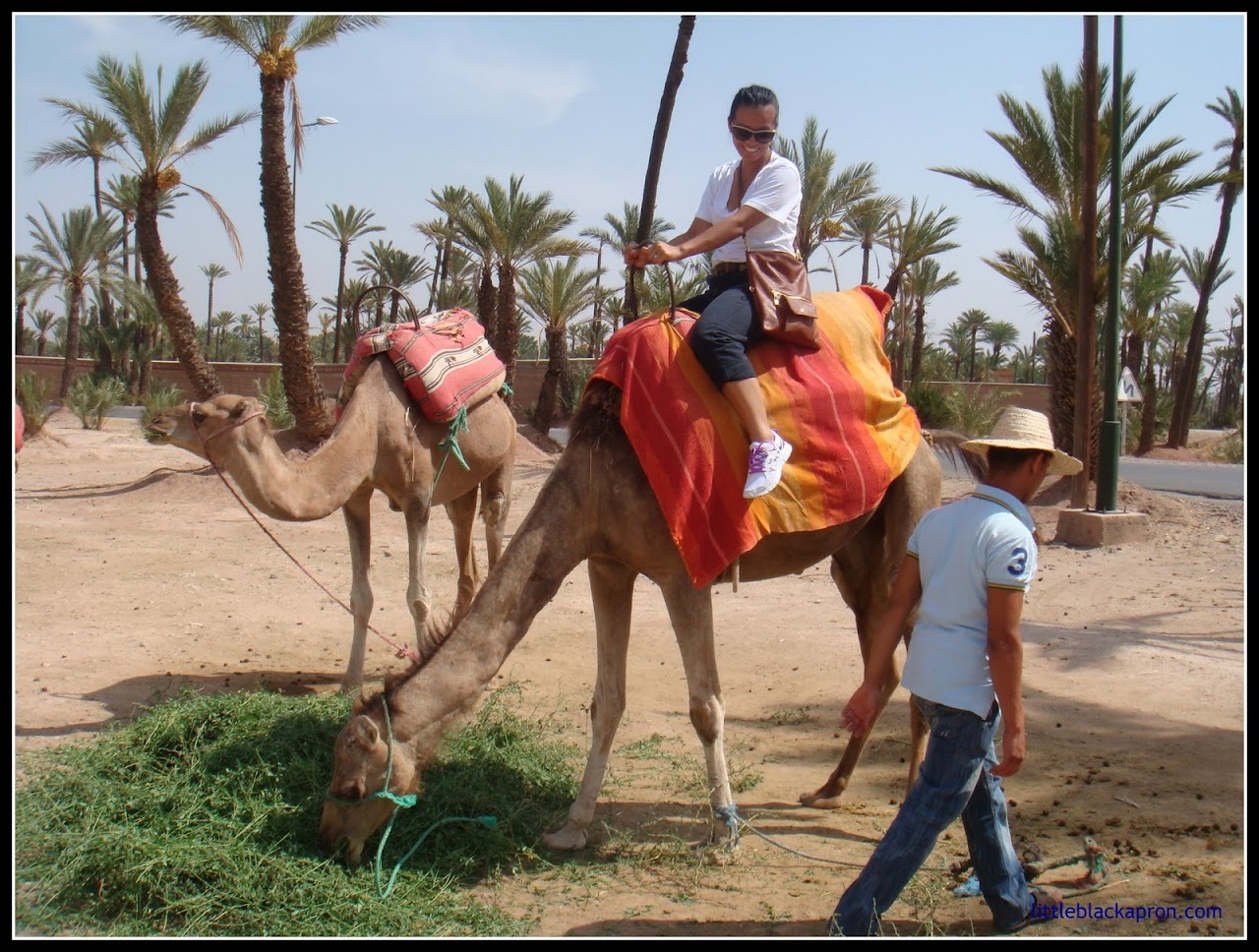 Then for dinner we went to dinner and a show… even though it took us forever to find the place.

This is just the first course aka appetizers. 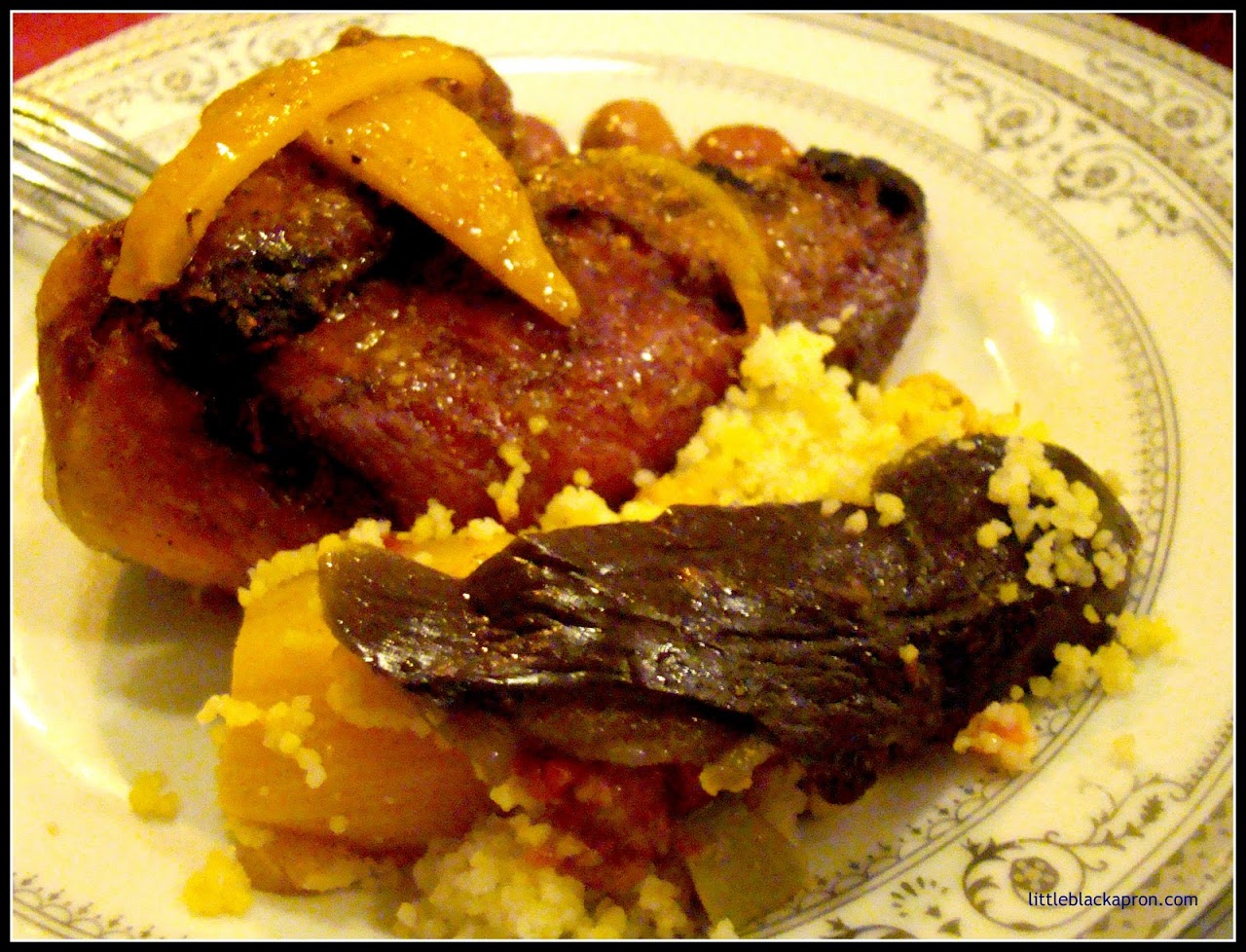 This was my meal.  Tagine Lemon chicken and couscous with vegetables.  It came to the table in a tagine but the camera battery was dying as I was trying to snap pictures.  😦 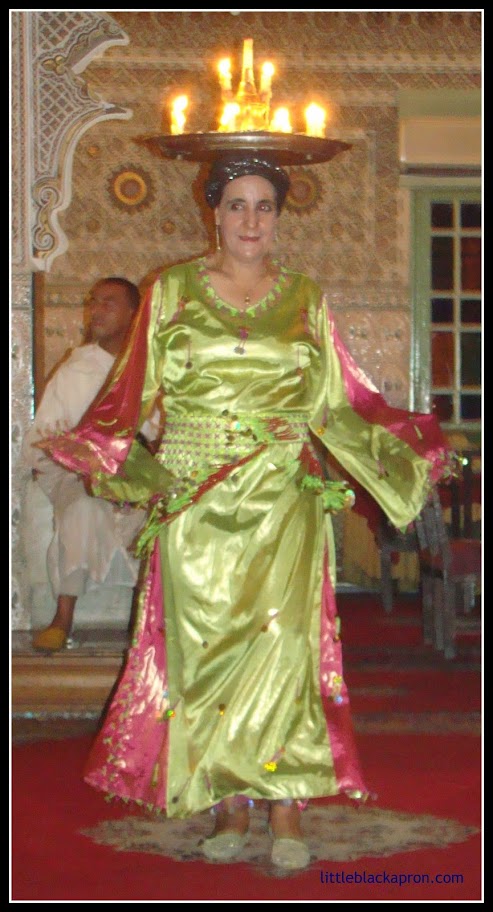 One of the dancers.  Theres a tea pot in the middle of that tray with candles on it.  She did an insane twirling motion and moving her neck around in a circle that I cannot explain while this train was on her head.  There was a belly dancer as well; however, I didn’t take pictures of her.

Gorgeous lanterns.  I wish I could’ve purchased one but 1) we don’t own a house to put this up 2) we had carry on luggages (weekender bags) and didn’t have any space in our bags.  😦 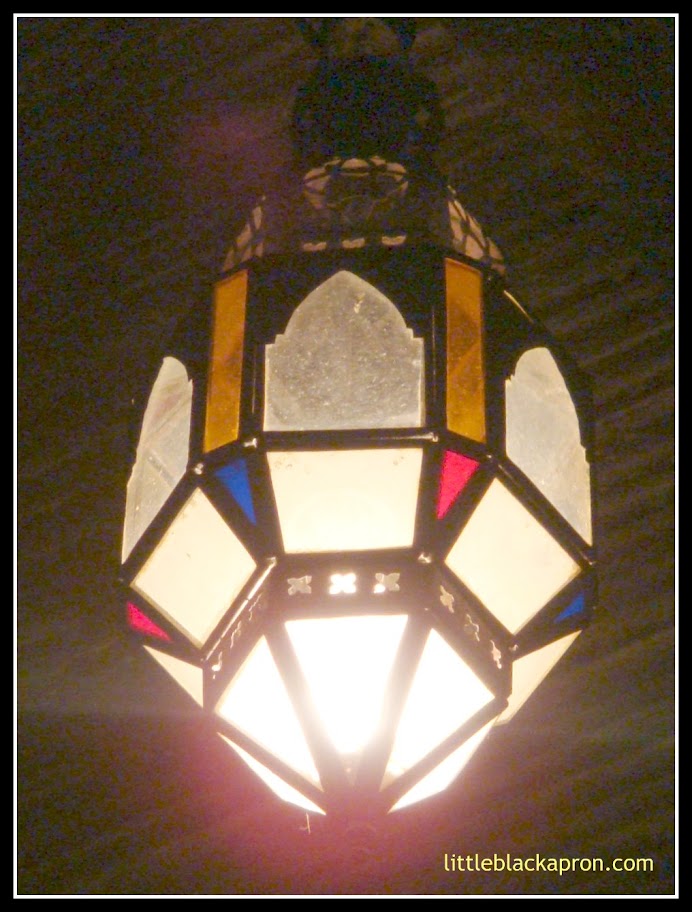 Things I wish we could’ve purchased but didn’t:

Lots and lots of pashminas (they’re CHEAPS here)
Tea set like the picture above. Stainless steal with the shot glass looking cups.
Large tagine
Bracelets.  Lots and lots of bracelets (cheap and colorful).
Leather belt, but they charged a ridiculous price, so I walked away.
Flats. Not exactly the ones from Sex and the City 2 but a little similar and as colorful.

Things we didn’t do that I wish we could’ve:

Go to the Western Sahara but that’s a 3 day trip I believe.
Go to the eastern shore of Africa to see the other side of the Atlantic Ocean, but that was a 6 hour drive.
Go on a hike to the valley with a waterfall.
Go to Casablanca, but that was 6 hours away also.
Go to the hamman, Moroccan spa.
Be waken up by the 5am Call to Prayer (we heard the evening ones as it was Ramadan when we were there, but didn’t hear the morning ones).

It was very HOT while we were there; almost 110 everyday.  But it was an amazing trip.  It wasn’t a western country, it a mix of third world and western.  It was different but in a good way especially since we were introduced to a different culture.  Gotta love traveling.  🙂