I’ve shared with you my chicken adobo recipe here.  In a Filipino household you typically make adobo with chicken or pork or a combination of chicken and pork together.  I have never liked adobo with pork because I always found that the pork was either tough to chew or when made with chicken it made it gritty.  I’m thinking this is because my grandmother put random parts of the chicken into the adobo, like GIZARDS.  NASTY!  When she lived with our family, my dad had to nicely tell her to stop because my sister and I wouldn’t eat it it.  (It’s a cultural thing to use the ENTIRE bird when cooking as money back in the day was tight, so to stretch a buck or peso in her case they added the entire chicken to adobo.)   I wasn’t picky as a child but because my parents heard me complain they started making adobo with just chicken and I’ve always liked it that way and made it that way… with just chicken (and the parts of the chicken I actually like).  Until now.  I still won’t combine chicken and pork together for adobo.  I haven’t crossed that bridge yet; however, I have found a way to have SUCCULENT tenderizing mouth watering pork adobo.  Almost pulled pork style, if you want to pull it.  I so happened to pull my pork for this recipe as shown below.

The ingredients are the same as that of the chicken adobo recipe; however, you do have to brown the pork in a pan first before placing it into the slow cooker to eat to lock in the flavor (Note:  Do NOT season the pork shoulder with salt prior to browning.  I did this the first time and it was saltier than I would have liked.).  Then you as they say in the infomercials… Set it and Forget it.  Corny, I know. 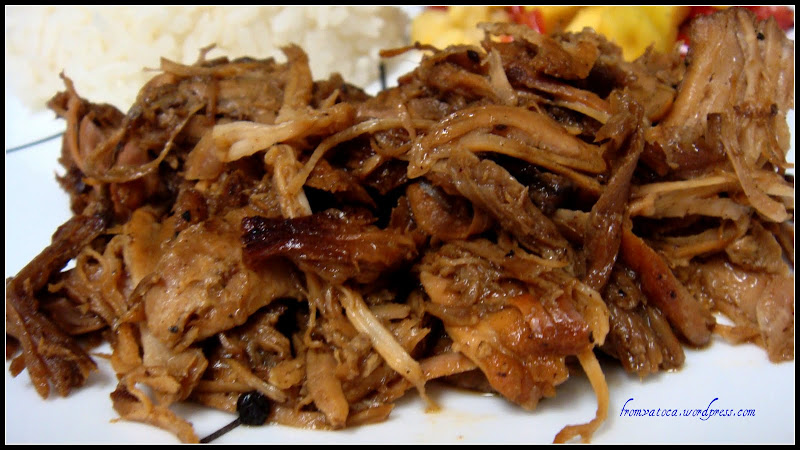 Note:  DO NOT SEASON THE PORK SHOULDER PRIOR TO BROWNING THE MEAT.  This along with the fat on the pork and the salt from the soy sauce will make the dish saltier than Salt City (ha!  I made a funny.  Well not really, but you get the jist)!

While this is occurring, mix the remaining ingredients in a bowl.  Taste to ensure that there is a good balance of sweet, salty and sour/tang.  If necessary, add some more of another ingredient (whichever you think is missing) or a hint of water if you’d like to dilute the flavor a little bit, especially the saltiness. 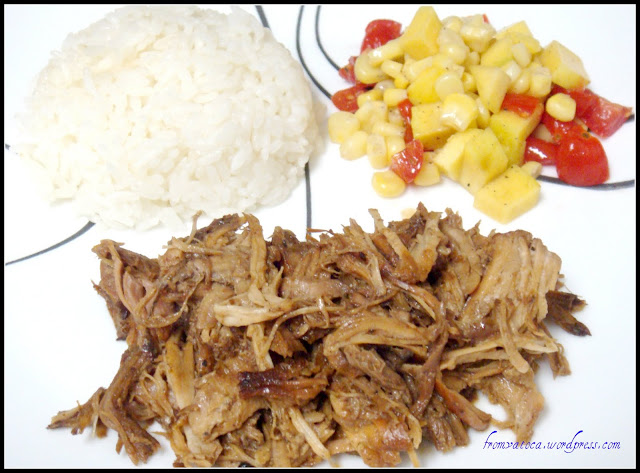