My apologies yet again for a ridiculously delayed post.  To say I’ve been uninspired, I’d be lying.  I’ve had food and fashion ideas for posts.  I have all the pictures, but they do need to be edited.  I was going to share my food haul from London, as well as my uniqlo haul.  Again, pictures need to be edited.  A fashionista’s Christmas gift haul, which obviously is MONTHS late.    I’ve simply been lazy.  Life has just been tiring.  Not hard.  Simply, tiring.  After work, I just want to eat, like the fatty I am, and proceed to cuddle with the mister (if he lets me) on the couch.  I know boring, but it warms my soul.  (LOL!  what a cornball)  But I do need to get back to blogging, its like exercise.  It’s therapeutic and keeps my creative juices flowing.  What a lame-o!

This post is about my trip to London, more specifically… Borough Market.  I’ve been to London a handful of times and I have yet to go to the Borough Market until this past trip.  I’ve always gone to Portobello, Covent Garden, and Camden Markets which have a good amount of food but the shopping done there is mostly for antiques, accessories, clothes, and cheaper or unique souvenirs.  Borough Market is a food market, so needless to say I ate my way through the market… actually the entire weekend I ate my way through London.  🙂  I LOVE London.  But London has never been the same since I went with the hubs a couple years ago…  awww.  What a married old hag.

Here’s the low down of my trip.

Friday Night – my coworkers and I went to Noura, which is a Lebanese chain.  We ordered tapas style and purchased a bunch of appetizers to share, naan, and Lebanese house wine (which was QUITE delicious).  SOOO GOOD.  I recommend going here.

Saturday – woke up early and purposely did not eat breakfast at the hotel so I could be hungry for the market.  Spent almost the first half of the day at the market and tasted a bunch of samples, ordered some oysters, raclet, and duck confit.  HEAVEN on earth!  Left satisfied and happy.  Dropped my stuff off to the hotel and then made our way to Portabello Market quickly (it was getting dark and the stands were closing).  Got there with just enough time to snap some jewelry.  I wasn’t feeling the clothes this time.  There were a couple of food stands that I wanted to go to like waffles, crepes, and cupcakes (I hear that Hummingbird Cupcakes in London are to die for), but we were going to Ottolenghi, a bakery that received really good reviews, for a mid-day snack.  Ate some DECADENT cake and went back to the hotel to relax before heading out to Belgo, Belgian restaurant, for dinner.  Of course I had some mussels and bread.  YUM!  Had a quick taste of beef charbonade… and put it on my list of recipes to eventually make.  We tried to go to Ice Bar afterwards but unfortunately they were sold out for the night and told us you have to reserve at least two weeks in advance.  BOO!

Sunday – ate some breakfast at the hotel… I don’t know why but I absolutely LOVE english breakfast.  I LOVE the grilled tomatoes, baked beans, eggs and their hash browns.  I did not however eat haggis.  Then I made my way to Bond Street and Oxford Street to window shop and buy a couple of things from Uniqlo for the husband and myself.  Again, I saw a couple things at Top Shop and Next but I wasn’t trying to spend THAT much (the US dollar is just ridiculous there).  I was seriously contemplating to buy a Mulberry Alexa but I resisted.

So here are a couple of snaps from my Burough Market.  My snaps of my hauls (both food and clothing) will be posted later. 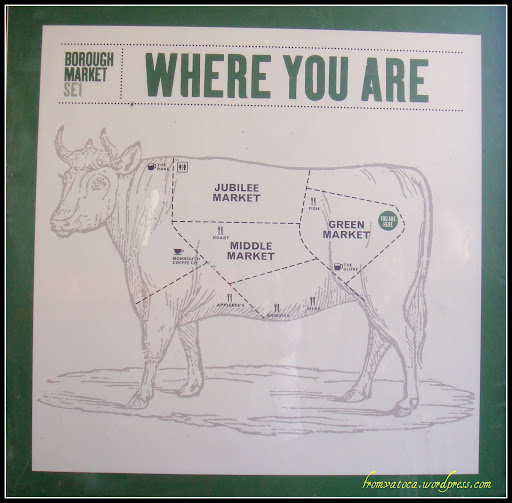 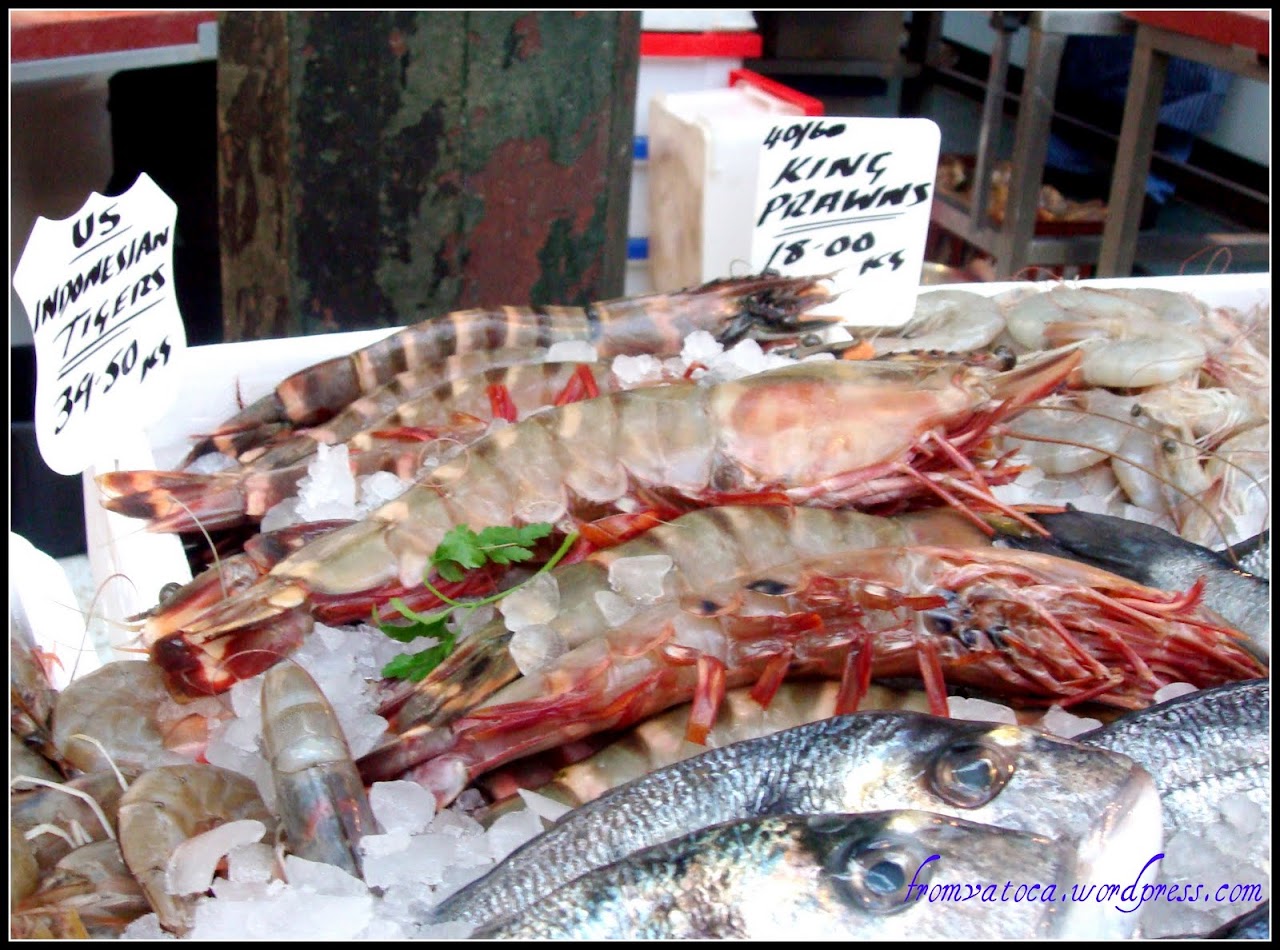 RAWR! (Although, I highly doubt fish make that sound.  LOL! But look at that tuna to the right.  TO DIE FOR!) 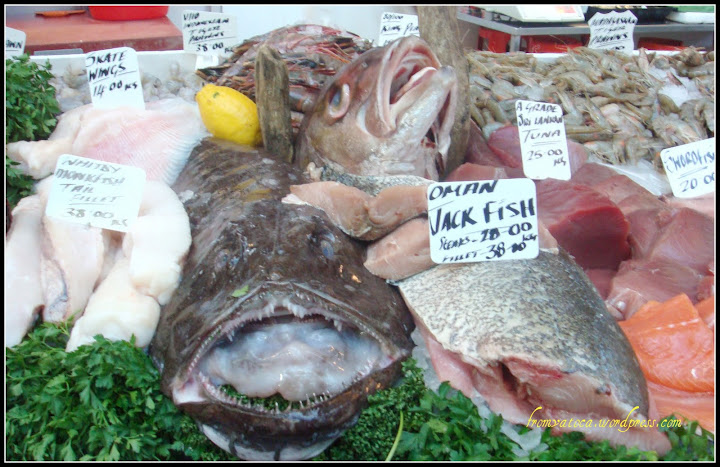 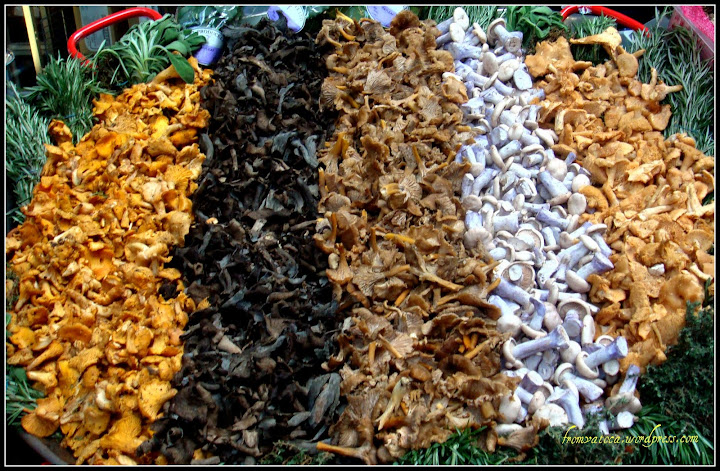 Just amazed that they actually sold ostrich meat at the market 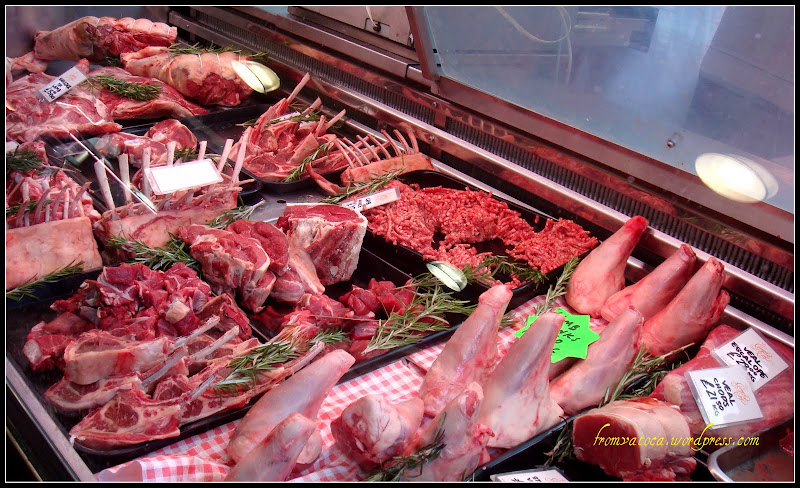 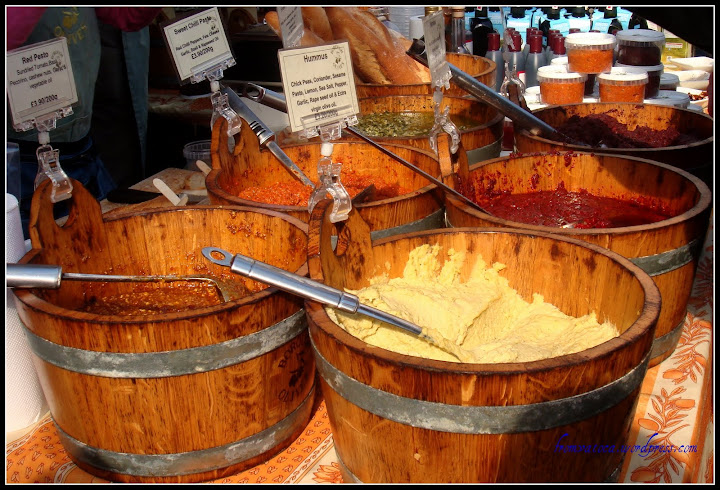 Pastries (YUM! OMG!  Look how gigantic those English Muffins are!) 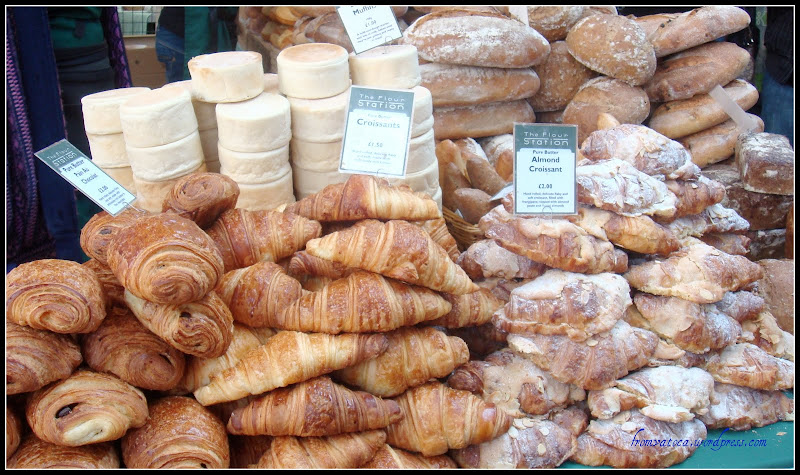 Better yet, look how gigantic or should I say COLOSSAL that elephant garlic bulb is.  REDONK! 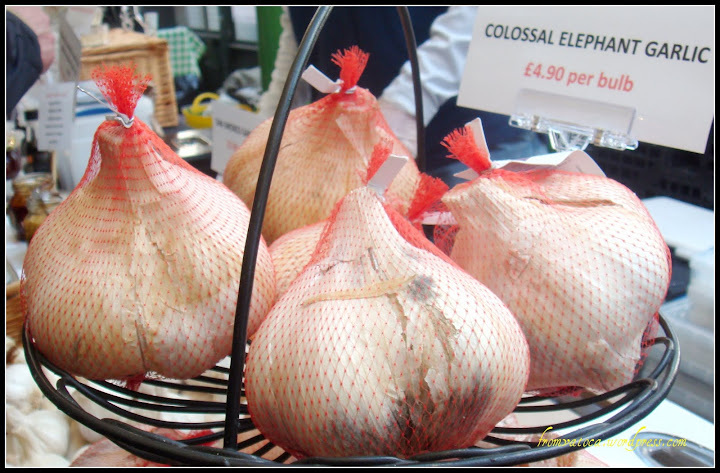 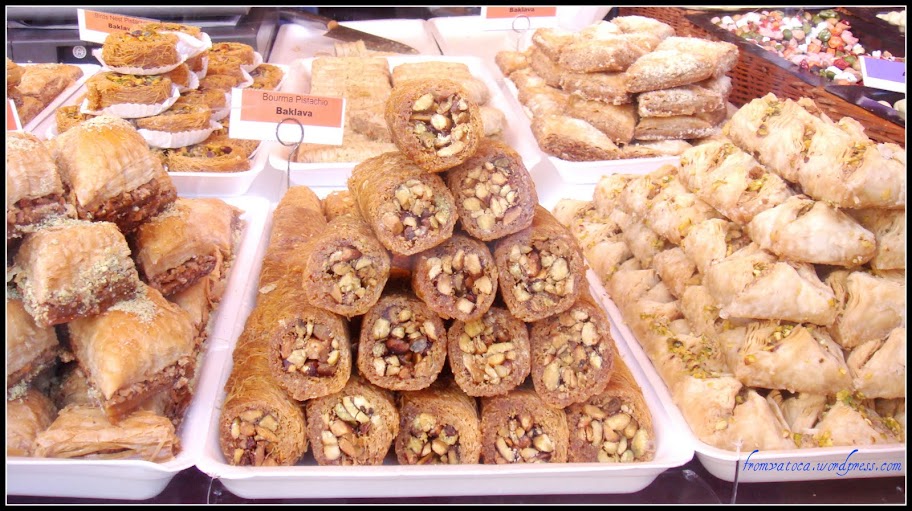 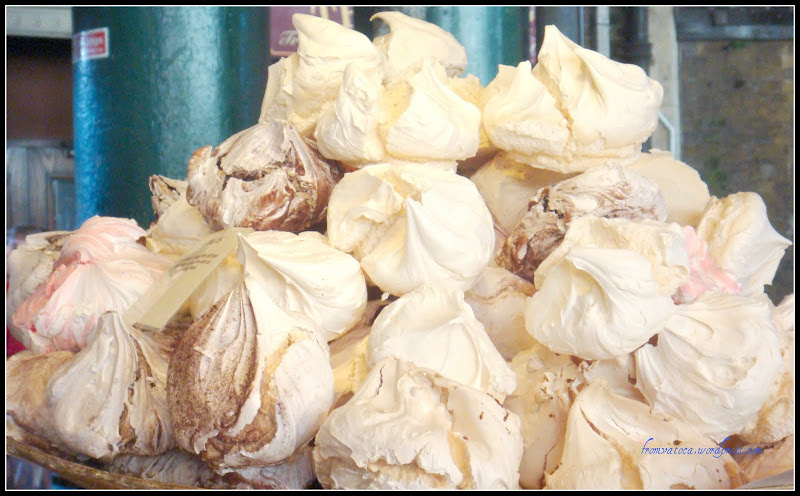 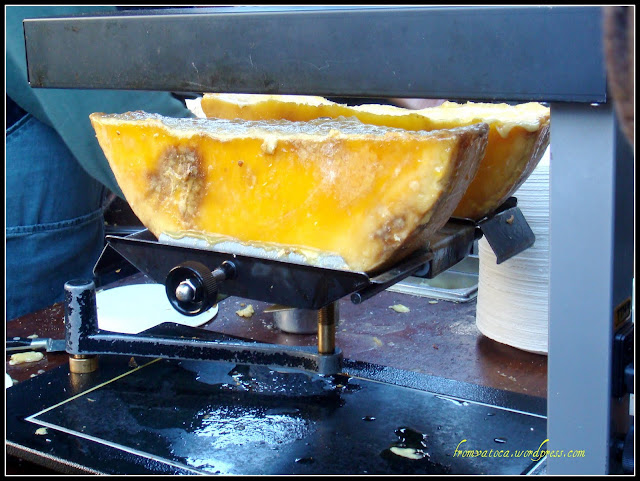 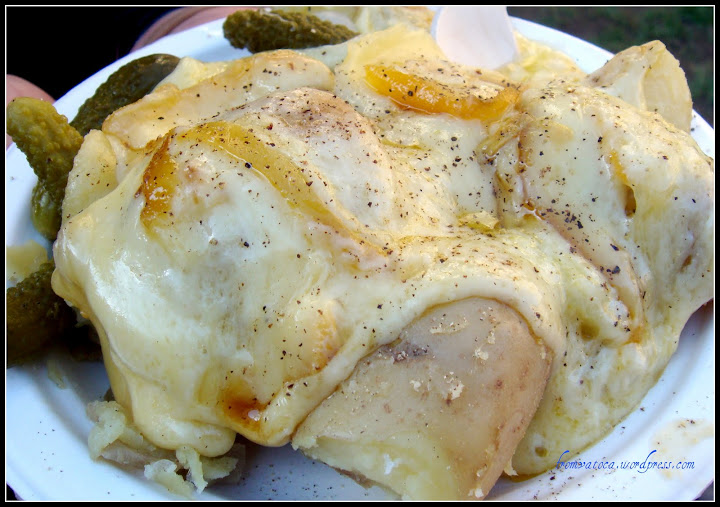 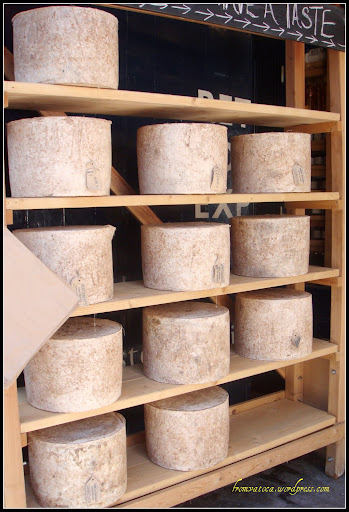 If you can’t tell already… I WAS IN HEAVEN that weekend or that Saturday!  SO SO SO MUCH DELICIOUS FOOD!  I don’t even have a picture of the oysters, duck confit sandwich, samples of cheese, chorizo and speck we had.  YUMMY YUMMY IN MY TUMMY!  Definitely go to Borough Market if you want some tasty eats next time you’re in London.